Video: How to keep an insatiably hungry harvester moving 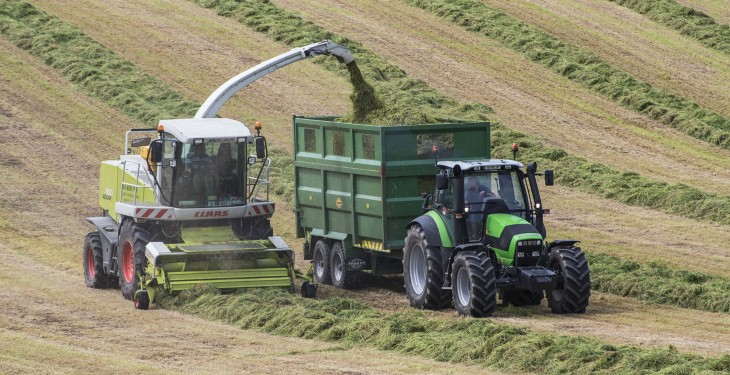 Struggling to find an operator that can drive steadily alongside a self-propelled forage harvester? Why not simply abandon the whole notion of side-filling on the move? Here’s how…

Contractors and machinery manufacturers in continental Europe have come up with innovative ways of keeping foragers moving, without the need for tractors and trailers constantly running alongside.

Various manufacturers and after-market engineers have come up with ‘solutions’, based around the ‘bunker’ concept. This involves attaching the harvester to a bunker, which typically calls for some heavy-duty engineering modifications. Then, the forager operates much like a combine, in so far as it can store the crop as it gathers it.

When the bunker is full, or when it suits best, the bunker empties at a high rate of discharge into a waiting tractor and trailer – or even a truck.

Depending on the system in use, emptying either takes place while stopped at the headland or can take place on the move (but taking seconds rather than minutes).

Claas built its first Field Shuttle back in the 1990s. A significant number were sold to contractors in France, Holland, Germany and Belgium.

They are now typically used by specialist grass-drying companies, where there are long hauling (carting) distances to contend with.

Krone is also an advocate of the ‘bunker’ approach. Based around a Big X self-propelled forager, this system (below) enables unloading on-the-move. However, the bunker dwarfs the harvester, which is a substantial machine in its own right.

Below is another unload-on-the-move solution; this time using a Scania-powered drive unit. A crab steering system allows the rig to track sideways up and down the field. This helps to spread the substantial weight of the rig across a wider width, to avoid rutting.

One of the most powerful bunker-type contraptions is this machine which is built around a New Holland forager (below). It boasts a whopping 1200hp and, like the machine above, crab steering – to spread its portly weight across a large footprint. However, it must stop to unload.

Of course, the idea of a bunker-type forage harvester is by no means new. Nor is it even new to Ireland. Older readers may have fond (or traumatic) memories of the Hesston Field Queen.

A number of Hesston Field Queens were sold in Ireland. While innovative at the time, there were concerns regarding machine stability on sloping ground.

Hesston persisted with the concept, with the subsequent launch of the 7730. However, by that stage, Irish silage contractors had migrated to foragers like the 7720, 7720 and 7735 – ‘conventional’ self-propelled machines with no on-board crop storage.