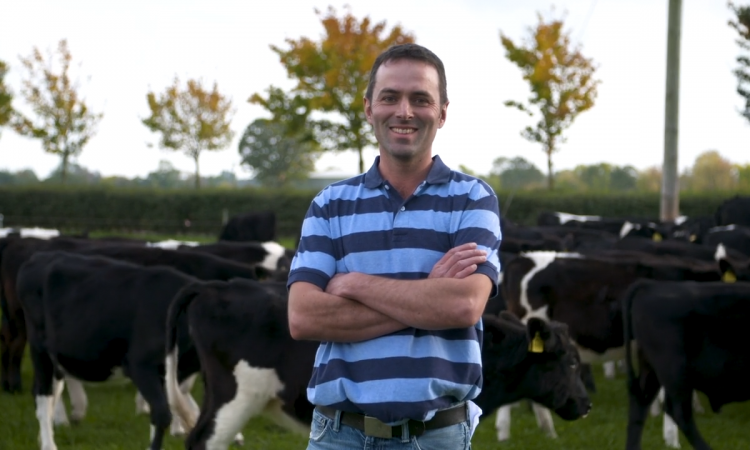 “It was a fantastic experience and there was plenty to learn; however, I wouldn’t trade my own system of production for any of the systems I saw.

“Irish milk production is more sustainable both environmentally and financially. Our grass-based production gives us a competitive edge.”

These are the views of award-winning dairy farmer Eamon Sheehan following his tour of the top dairy farms in the Netherlands, France and Spain last month.

Eamon Sheehan, who milks 174 cows at Cuffesgrange, Co. Kilkenny, was the inaugural winner of the Prevention for Profit competition in 2018.

Run by MSD Animal Health, the competition was aimed at dairy farmers who are maximising profitability by focusing on four key pillars of production –genetics, management, nutrition and animal health.

He beat competition from all over Ireland to take the top award. His prize was a week-long study tour of seven European dairy farms. He was accompanied on the tour by Jack O’Connor and John Heslin of MSD Animal Health Ireland and by executives of MSD Animal Health in the three countries visited.

The trip provided him with valuable insights into European dairy farming. Eamon expressed a particular interest in the attitude and management of animal health, especially the frequent contact farmers have with their veterinary practitioner.

On one of the farms in the Netherlands, the veterinary practitioner visits the farm every two weeks to evaluate and advise on the health status of the 220-cow, all-year-round-calving herd.

While a fortnightly visit is not the norm, an advisory visit by the vet every six weeks would be standard for dairy farmers.

Farmers in the Netherlands are required to have their vet draw up an animal health and treatment plan every year. The vet must also complete an annual report on the health and welfare status of the herd. If the farm is ranked ‘at risk’, the vet must determine the causes and propose remedial action.

On one of the French farms we visited, that consists of 120 dairy cows and a bull beef enterprise which involves finishing 240 Charolais bulls; the vet responsible for the farm conducts fortnightly advisory visits.

The vet is paid an agreed percentage of the output of each farm for the fortnightly visits. This is the business model implemented by this veterinary practice and both the vet and farmer seem very pleased with the working relationship.

The veterinary practice also employs an animal nutritionist who provides advice on all aspects of nutrition and diet to farmers.

In Spain, the group visited two progressive dairy farms north of Madrid in the town of Segovia. Temperatures at the time soared to just below 30º.

The first Spanish farm had 630 cattle including 220 milking cows, 230 heifers and 180 bulls destined for beef. The second Spanish farm visited was milking 272 cows with four robotic milking systems. This farm has been operating for the last 12 years and upgraded all robots in 2018.

Here too, the vet plays a crucial role in disease prevention, whereby the vet and farmer develop a herd health plan with the aim of reducing antibiotic usage and improving animal performance.

Many of the farms visited have moved to selective dry cow therapy where only cows with somatic cell count (SCC) level greater than 150,000 are given an intra-mammary antibiotic at drying off.

Cows with low SCC counts are treated with a teat sealant. It’s all part of the effort to reduce the use of antibiotics.

Mastitis can be a big problem in European dairy systems, particularly where cows are indoors all year round. Summer is a high-risk period for the indoor dairy system where high temperatures increase the exposure to infection.

One of the French farms visited has recently installed a ventilation system in order to control ambient temperature and improve overall health and well-being of the animals.

On all farms, there is a big emphasis on vaccination to prevent disease and a strong focus on continuous reduction in the use of antibiotics.

In the Netherlands, for example, farmers by law must have a herd treatment plan in place in order to get access to antibiotics.

Vaccination with Bovipast® RSP against bacterial and viral pneumonia, especially in young stock, is commonplace. Some of the farms in France and the Netherlands have IBR-free certificates which are regarded as very important for trade.

On other farms, intranasal IBR vaccination from two weeks-of-age was common practice followed by a single shot into the muscle at three months-of-age in the effort to eradicate the disease.

The remainder of the herd received a shot into the muscle every 12 months with Bovilis® IBR Marker Live (after firstly receiving a shot at three months and nine months-of-age).

Advertisement
IBR vaccination is an integral part of the herd health programme on the French farms they visited in their attempt to eradicate IBR disease from their farms.

Salmonella is a significant threat in the Netherlands. Infected water from the vast network of canals is a contributor to the disease.

Interestingly, unlike Ireland, there is no vaccine available to Dutch cattle farmers to control salmonella. Farms that test positive for the disease are required to undertake a very complex and expensive programme. Their herd must remain closed and infected animals must be removed from the herd to reduce the level of disease.

The approach to vaccination on the Spanish farms was very positive. In particular, a big effort is made in reducing diseases and protecting the herd against BVD, IBR, pneumonia, calf scour and clostridial infections.

Vaccination protocols are implemented and administered to the herd at the appropriate times to reduce the incidence of these diseases.

While Eamon was impressed with the high genetic merit and high performance of the herds he visited – milk yields are at 10,000L and upwards – he is not at all envious of the labour-intensity of the European production systems.

For example, one labour unit for every 50 cows is the norm. This would not be sustainable on Irish farms. On the Dutch farm with 220 cows, four to five cows calve every week.

Two brothers are farming together along with help from one of their wives and teenage daughter. During particularly busy periods on the farm, they would get additional labour to help with the workload. The brothers built additional facilities to accommodate 250 cows a few years ago.

However, due to the requirement for a reduction in phosphate production from the Dutch dairy herd, Dutch farmers were incentivised to reduce their cow numbers. If they exceed their phosphate limit, they will pay a levy of €8,000 per additional cow.

They already heavily borrowed which is common with Dutch dairy farms. The average borrowing across dairy farms in the Netherlands is €15,000/cow.

At the time of the visit in Spain, dairy farmers were receiving 32c/L which is a similar cost of production on the farms that we visited. There are bonuses paid on solids and the SSC is < 215,000.

Friesland-Campina, the predominant milk processor in the Netherlands, introduced a price premium for farmers who graze their cows on grass for a minimum of six hours, 120 days a year. It is part of a strategy by Friesland-Campina to market its dairy products as ‘green’ on international markets.

However, the brothers are not impressed nor, they said, are many of their colleagues. The price premium is 1.5c/L. He said it needs to be at least 3c/L to make it pay.

“The climate is too extreme outside; the cows damage the land and yields are reduced. I have stopped doing it. The cows are indoors full time now and are much happier. We mow the silage every five weeks.”

On one of the French farms, located near Angers north-west of Paris, the cows are let out during the day between April and November but “for walking, not grazing”.

On a second French farm in the same region, 8ha of grassland is irrigated for zero grazing. The rest of the feed is mainly maize silage and concentrates. The area, which is difficult for farming, gets only 700ml of rain per year.

The Spanish farms were all year-round indoor systems. The age at first calving is typically between 24 and 26 months-of-age, with cows remaining in the herd for an average of 2.7 lactations.

These are high-yielding cows and outdoor grazing would naturally reduce yields. On the second Spanish farm, the herd average milk production is 12,000L/year, with heifers producing around 11,000L/year and cows producing 14,000L/year.

A recently established floating farm on the outskirts of Rotterdam was a novel attraction for Eamon Sheehan and the MSD visitors. Located on a barge, the cows are kept on the top floor and there is a restaurant on the lower floor. Milk and yogurt from the enterprise are being sold in the restaurant.

The enterprise currently consists of 32 cows and has the capacity to go to 40 cows. The total investment was €2.5 million.

With a population of 600,000 in Rotterdam, it has the potential to generate a strong footfall. Still, it is an ambitious and courageous adventure.

Find out more on this story at: www.bovilis.ie; or simply click here