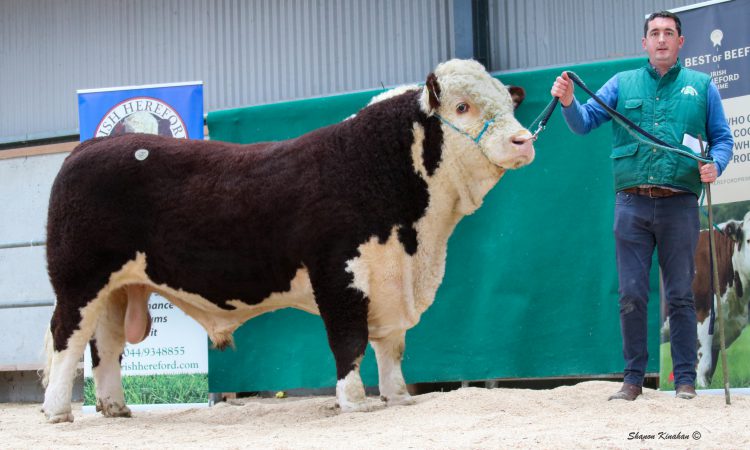 Covid-19 restrictions resulted in the cancellation of the sale’s hotly-contested pre-sale show of bulls and heifers.

Government guidelines were implemented to limit the number of buyers present ringside, with only a maximum of 30 people permitted. This was imposed by Tullamore Mart’s Covid-19 safety officers on the day.

Commenting on the restrictions, a spokesperson for the Irish Hereford Breed Society stated:

It hindered the sale somewhat, as a number of potential bidders were unable to gain access from the outset. However, exhibitors were satisfied with the demand and clearance of stock.

Online activity aided the sale, in what was a difficult trade for bulls and heifers on the day. Of the 33 males presented for sale, 17 found new homes, resulting in a clearance rate of 51%. Bulls for an average price of €2,650.

The sale was topped by Tullana Donny (pictured above), exhibited by Maura Neenan from Charleville, Co. Limerick. Sired by Rossmore Nelson Mandela, he went on to sell for a top price of €4,600.

This 21-month-old bull had previously served cows and heifers and was a prize winner at several shows during 2019. He was purchased by a farmer from his neighbouring home county in Tipperary.

Next up to sell at €3,600 was Ardstewart Eby Gum, which was sired by Cill Cormaic Prince 2, with his maternal grandsire being Kilsunny Goliath. He was shown by Nelson and Wade McCrabbe, from Lifford in Co. Donegal and was rated as a 5-star on the Terminal Index (within breed).

After long drawn out bidding, Eby Gum was sold to an online purchaser from Co. Donegal.

K and M Diffley from Co. Leitrim sold Duibhgiolla Lad for the third-highest price of the day, at €3,100. Sired by Black Water Lad, he also had sires such as Diuibhgiolla Wizard and Yarram Pompeii in his maternal back pedigree.

This 16-month-old bull found his new home on a pedigree breeder’s farm from the south-east of the country.

The auctioneer’s hammer fell at €2,900 for Trillick Showman, exhibited by Co. Longford breeder James J Farrell. A Glaslough Rooney son, this 15-month-old bull had an impressive set of calving figures representing a value of 1.1% on matings with beef cows and 4.2% on matings with beef heifers.

A pedigree breeder from Co. Dublin secured this bull as a new herd sire.

Beaghmore Pilot, sired by Gageboro Morgan, ‘flew’ on the day, achieving a selling price of €2,800. With Bowmount Storm representing this bull’s maternal grand-sire, he was shown by Leila McCabe, from Carrigallen, in Co. Leitrim.

The purchaser, on this occasion, was a Co. Galway based farmer from Ballinasloe.

The heifer trade achieved a similar clearance rate to the bulls at 53%, with nine out of the 17 females presented for sale finding new homes. The females achieved an average price of €2,100.

Topping the female trade at €3,050, was August 2019 born Appel 1 Savannah exhibited by F and J Appelbe from Clonakility in Co. Cork. She sold with an impressive set of figures, having a Replacement Index value of €142, giving her a 5-star rating (both within and across breeds).

This heifer headed across the border to a farmer from Dungannon in Northern Ireland.

Padraig Mcgrath, from Co. Roscommon, exhibited the second-highest priced female on the day – Kye Holly 876. This maiden heifer was represented with a 4-star rating on the Replacement Index (within breed). Sired by Glaslough Rooney, and out of a Free Town Hotspur bred dam, she went on to sell for €3,000 to a herd based in Co. Tipperary. 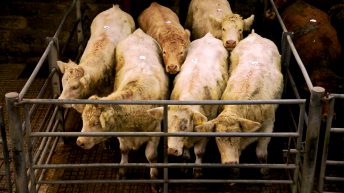