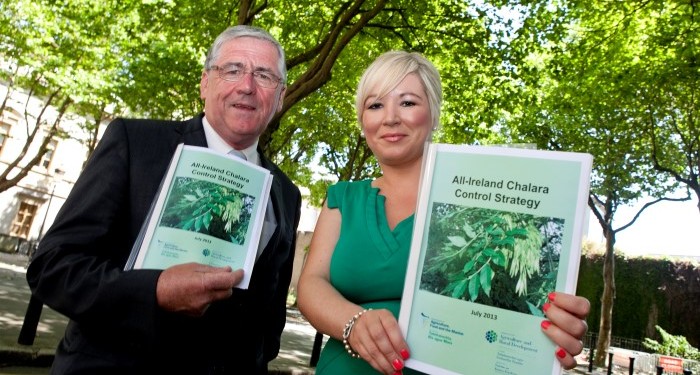 The strategy sets out the policy and actions which will be taken as part of the continued attempt to prevent Chalara ash dieback disease becoming established in Ireland.

Minister O’Neill said: “The fact that Ireland is an island, isolated from potential sources of infection, suggests that there is a reasonable hope of preventing or slowing down the disease from becoming established here. The effectiveness of our approach is likely to depend on detecting and eradicating any incidence of the disease within Ireland before it spreads to ash trees in the wider environment.”

Commenting on the Strategy, Minister Hayes said: “So far, this disease has only been found in recently-planted ash trees linked to imports and our aim is to reduce the risk of the disease becoming established here.  The strategy is comprehensive and covers many elements including our joint approaches on eradication, research into breeding for resistance, engaging with the public and other stakeholders and advice for woodland owners.”

The Ministers discussed this year’s surveillance plans, disease findings and the support available to woodland owners to destroy affected ash plants and replant their woodland with alternative tree species.

They welcomed the support and comments provided by farmers, woodland owners, forestry companies, environmental groups and other stakeholders during consultation on the Strategy and at stakeholder meetings. Minister O’Neill said: “We continue to urge people to be vigilant for the disease and to quickly report symptoms they see to their respective Departments. This will greatly assist in complementing the aims of the Strategy.”

More details on the strategy can be found here.