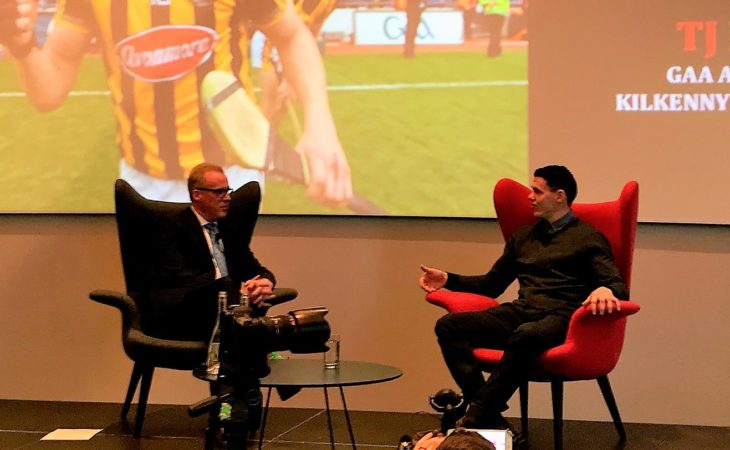 They say footwear can tell a lot about a person. And for Kilkenny GAA superstar TJ Reid, wellies – not hurling boots – are his attire of choice.

Standing in the upper decks of the Hogan Stand at yesterday’s Certified Irish Angus Beef Schools Competition, the beef and dairy farmer couldn’t but gaze out at the hallowed pitch that the ‘Cats’ fell just short of gracing during last year’s All-Ireland Senior Hurling Championship.

Although his sensational GAA record to date includes a staggering seven All-Ireland inter-county medals; plus, three All-Ireland titles with his club Ballyhale Shamrocks, the classy forward’s determination for success again this summer is already beyond question.

But, when the subject turns to farming, it’s hard to imagine that any other ‘gra’ runs as deep.

Candidly he says: “I have a huge passion for farming. These days, when it’s cold and bitter, I love getting out into it because it’s refreshing. You can forget about everything that is going on in your life.

“I think in Ireland a lot of people get caught up in ways; they can’t get that time away to de-stress.

There is nothing out there I love more than coming home from training or a match, putting on my wellies and going up to the farm.

“For me farming is my way of forgetting about life; sometimes you need to get away from work – from whatever is going on – even from friends. Just being out in the open fresh air is very grounding.

It allows me to take all my energy away from work; away from hurling so I can just focus myself on the farm and how lucky I am and how grateful I am.

As Sundays are usually match days for TJ, Saturday is his day to be out on the family holding in Ballyhale where they have 120 dairy cows; they keep all calves to beef. They also breed pedigree Limousins and Charolais.

His “claim to fame” occured at the Roscrea Premier Show three years ago when his prized heifer, Jasmine, was crowned female supreme champion.

“I remember when the animal calved – first I was hoping it would be a live calf; then I was saying to myself ‘I hope it’s a bull’. It wasn’t,” says TJ, rolling his eyes back with a grin.

I was awful upset; it was a heifer. But, I knew after a month that she was going to be very good because she had all the confirmation.

“So that day I knew she was going to be a dinger,” he says.

The director of TJ Reid’s Health and Fitness, and former sales representative with Connolly’s Red Mills, says he made sure to look after Jasmine every day.

He would go up to her in the field to make sure she was thriving, ensure there were no scares and that she didn’t get sick.

Then, after about 10 months, TJ started halter training.

“We try to halter train them at a young age because if you leave them too late they might get very stubborn in a way.

“We get them out into the shed because pedigrees – when you’re walking them – they have to be very quiet. The job was trying to rub them and pet them to make sure that they are quiet.

No farmer likes a cracked animal going into a parade ring.

“It’s just that passion, you wash them, trim their hair, trim their tails, make sure their hooves are clean and then you bring them to Roscrea. It’s a special occasion,” he said.

But when he lands on site his instinctive, razor-sharp competitive edge kicks in.

“The first thing you do is look at the competition – it’s like the GAA,” he laughed.

“We played Wexford last weekend and the first thing you are doing is looking at the competition, so it’s the same thing.

You’re saying ‘that heifer is looking good’; and ‘jaysus that one isn’t too bad either’. Then you say ‘best of luck’ to everyone and you go into the parade ring.

“I love when there is a top ref judging because you know people are looking at Jasmine, they are talking to you about her and they want to know what she is bred from.

“When she won first place people came out of everywhere to shake my hand; it was very enjoyable and there is huge pride in it. She was my highlight,” he said.

Although Jasmine has since been sold on to another breeder in Co. Monaghan; TJ says he is constantly educating himself on crossing over sires to land his next blue ribbon.

After awarding Mark Shorten and Conor Lehane, from St. Brogan’s College in Bandon, Co. Cork, with the top prize from the 2018 Certified Irish Angus Beef Schools calf-rearing competition, TJ says he wishes such a contest ran during his school days.

The initiative, organised by the Irish Angus Producer Group, ABP and Kepak, challenges students to rear five Irish Angus cross calves for 18 months until they are ready for slaughter as part of their Leaving Certificate Agricultural Science project.

The aim of the competition is to encourage second level students to gain an understanding about the care and attention that is required to produce and market the highest quality beef for consumers.

Each of the finalists received the financial benefits involved in the selling of the animals to the processors on completion of the project, which amounted to an average €6,550. 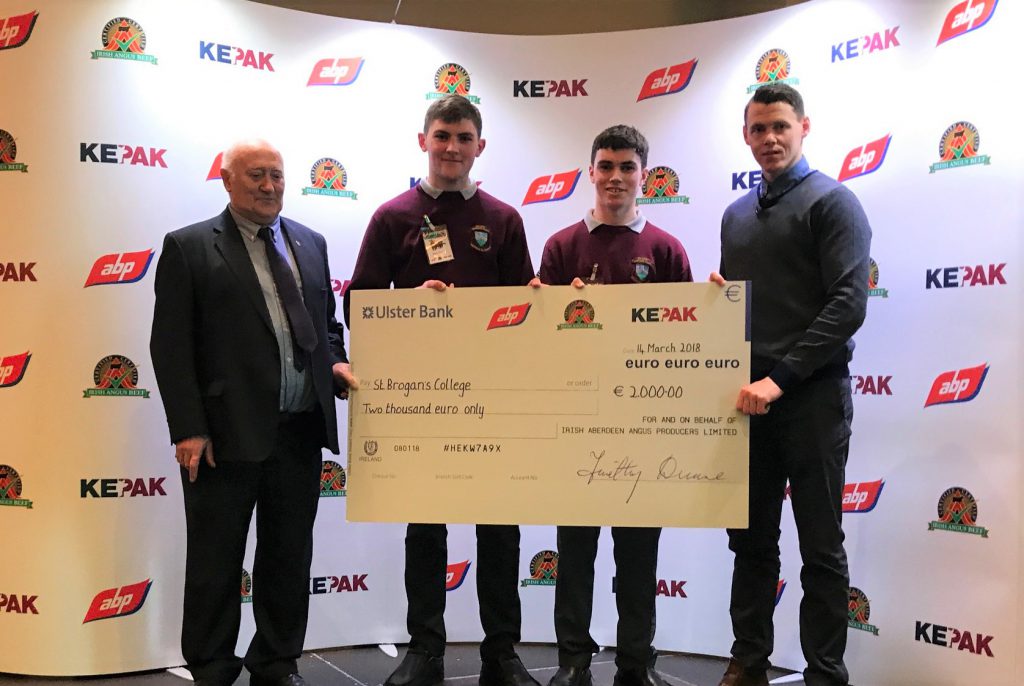 He says himself and his friends would have jumped at the opportunity – some more than others, he jests.

“I was known for getting trophies for hurling; but, if this was there back in our day it would entice you more into agriculture and to keep working hard at it.

It is a fantastic opportunity for schools and for children to learn about farming; because a lot of children don’t know the ins and outs of how food is produced in Ireland.

“At St. Kieran’s College I did ag science and I know a number of friends that were in the classroom now have their own farms.

“If a few of my friends got involved and got five calves each to rear; I know one farmer who would definitely be looking for the cheque at the end of it. He’d be a bit tight like that,” he laughed, without divulging a name.

“But it would have been great. All the contestants said it themselves, they came together, learned the ropes and worked as a team – that’s what secondary school is all about,” he said.

If farming is in your blood, TJ’s advice is “hold on to it” – especially those also interested in pursuing a high-level sporting career.

“It’s very true that there are less farmers involved in GAA at the top level; but, I suppose they are both very time consuming.

“Dairy farming is seven days a week; twice a day and it’s very hard. Farming is physically and mentally draining because of the long hours and trying to get to training at 6.30pm in the evening and have the cows milked on time.

“At 21 years of age if all you want is to be a county hurler, or county footballer, you will probably try to get a job in something that suits you training-wise. That’s why a lot of county stars are teachers; because of the lifestyle it allows.

“For me, before I opened up my own gym facility in Kilkenny, I was a sales rep selling feed, so I was at home.

“My older brother got the farm, I was never going to get the farm; but, I stayed in contact with farmers and the community through my work. I’ve always dealt with farmers; five days a week I was selling dairy nuts and beef feed.

If you like being involved in farming there are lots of other opportunities out there within agri business. Agriculture is thriving in Ireland – for a small little country, we’re one of the top food exporters in the world.

“You could be an agri sales rep, a nutritionist for Glanbia, or you can work in production management; so there are other areas where you don’t have to be a farmer,” he said.

Although it’s a bit early in the year to forecast how this year’s All-Ireland Senior Hurling Championship will shape up; there is only one winning circle that TJ is currently focused on.

“We’re improving as the days go on, it’s still early days yet. But being here and looking out at the pitch just reminds me of how we didn’t get to Croke Park last year.

That will be our main goal, we want to get back here either through Leinster or at the later stages. 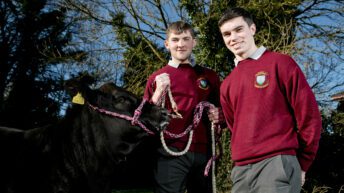 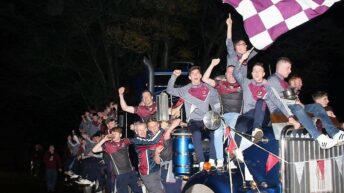