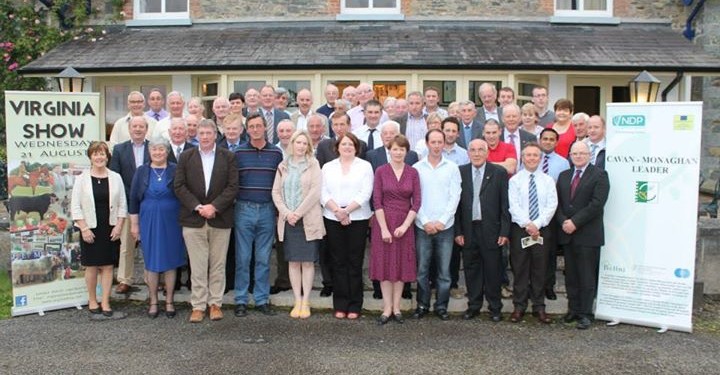 Prof Wall commended the committee on its annual show and its can-do attitude. He spoke about Irish agriculture and agri-food and the quality needed to differentiate  products and the produce of other countries and that a rising tide can lift all hope.

“We need to look at confidence that is key especially to future farming as a business where we need to operate on the global stage. We underestimate how much we know about farming,” he said.

Prof Wall spoke about the toxic negativity in Ireland at present and the need now to be positive. He also suggested we need to be competitive because of economy of scale on the global market.

He spoke about creativity as we undersell Ireland when we take everyday images for granted such as cows on grassland. He called for a need to market better packages.

On co-operation, Prof Wall suggested to work together, farmers and processors as team Ireland. He also spoke about credit and the need to get cash flowing again.

He commended the Virginia Agricultural Show as a renowned event with visitors from all over Ireland travelling to Cavan each August.

“The show promotes all that is good in rural Ireland; it has expanded from its agricultural base, to hold an interest for all family members both rural and urban,” he said.

This year of The Gathering, the show organisers are bringing people from UK, Wales, Holland  and further a field on Show Day.

The organisers have invited  farmers to its seminars in Virginia College starting at 10.30am on: ‘Modern Irish Dairy farming – best practice’; ‘The National experience of pasture-based systems’ with guest speakers Bertie Troy, Grasstec, talking about “Efficient Farming Infrastructure for modern Irish systems;  Andrew Cromie, Irish Cattle Breeders Federation, talking about ‘The role of Genetics in the modern dairy cow’; and Joe Patton Teagasc, talking about ‘Feed and nutrition of dairy cows’. This will be followed by questions and answers session.

In the evening, after a day of observing almost 500 classes and food demonstrations by renowned Chef Neven Maguire and Sheridan’s Cheesemongers,  music, craic and food Carnival style is planned.

Beside cattle, the show also plans to have the All-Ireland Final Art Competition, the ICA Guild Skills of the Year and The Home Industries section.

Among the classes are Brood mare, light and coloured horses, ridden hunter and cob, Heavy horses, palomino horses and ponies, Welsh and Connemara as well as the miniature horses and donkeys. It will once again feature a competition for retired racehorses that will be ridden and will compete over jumps. This year It has a new trophy in the Horse section presented by his family, in memory of its recently deceased member Wilkie Lyttle RIP.

There are dairy and beef classes for all cattle. These include the usual Holstein Friesians dairy classes and new classes this year for non-Friesian dairy breeds. It also has commercial classes, continental, Herefords, Aberdeen Angus, Charalois, Limousin, Salers, Simmentals, Belgian Blues, Blonde D’Aquitaine, and Parthenaise.

There will be classes for Sheep, including the Paddy Keoghan Cup for Pedigrees and the Hugh Faulkner Cup for crossbreds as well as Suffolks, Texels, Charalois, and Vendeen. It is hoped to have a sheepdog trials display. There are also classes for goats, poultry, farm and garden produce, oats barley, turf, hay, grazing and maize.