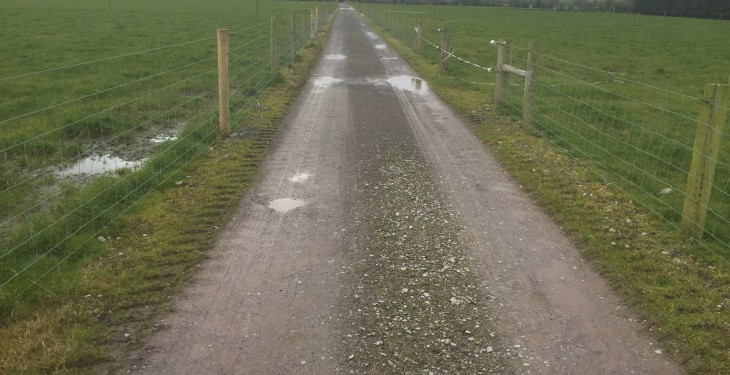 Farmers could be left counting the cost of a potentially mandatory requirement to modify farm roadways, in order to prevent direct runoff into waterways.

This is just one of the measures that was recommended by a review group during its third review of Ireland’s Nitrates Action Programme – a programme which was designed to prevent pollution of surface waters and groundwater from agricultural sources and to protect and improve water quality.

Currently, there is no provision for the prevention of direct runoff from farm roadways, according to the review group.

However, current regulations do contain effective farmyard management measures for the protection of waterways, the group added. These measures include the minimisation of soiled water and the collection and storage of manures, effluents and soiled water.

It is believed that 15,500 specialist dairy farms – which have a total farmed area of 870,000ha – that use farm roadways to move animals from the farmyard to different paddocks could be the worst affected by the recommended measure.

Advertisement
In its report, the review group indicated that the typical length of farm roadways is 1.4 km per farm. This would mean that almost 22,200km of farm roadways may need to be modified to prevent direct runoff.

The review group recommended that a measure is introduced requiring the prevention of direct runoff from farm roadways on all farms to waterways. It is understood that the requirement would be introduced by the beginning of January 2021.

It is hoped that this would allow farmers the opportunity to modify roadways, as deemed necessary, to prevent runoff.

There will be a range of potential options to prevent such direct runoff, the review group explained. These will include: the cambering of the roadway directing water to one side; measures to reduce the speed of water flow; and earth bunding (building walls of soil) along the road.

Relevant guidance information for farmers will be provided by the Department of Agriculture and training will also be provided for advisors.

The aim of this measure is to effectively prevent sediment and nutrient runoff from farm roadways, thereby protecting and improving water quality.

Some farmers may be forced to fence off watercourses by 2021