Polish power: The ‘Falcon’ lands on Irish shores at the ‘Ploughing’ 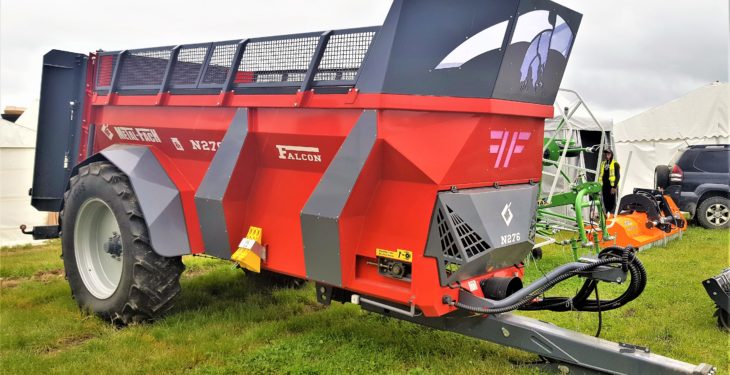 Looking for something different in the search for a new muck spreader? Polish company Metal-Fach might have the answer.

This rear-discharge muck spreader has an official capacity of 8t (9.5m³). It has a chain-and-slat floor conveyor, like most of its competitors.

It needs at least 90hp at the PTO – though, in practice, a fully-laden machine will need more muscle up front, with 120hp recommended by Egmont Agri’s Timmy O’Brien. O’Brien added that, in some instances, the spreader can actually take on 12t (10.1m³) of manure. This ‘Falcon’ costs €24,000 excluding VAT.

Metal-Fach is based in Poland; it was founded in 1989. It now employs about 800 people. It manufactures nearly 60 different types and models of agricultural machinery. It also produces truck trailers (under the Nova brand-name).

Egmont Agri – based in Mallow, Co. Cork – was founded by Timmy and Nora O’Brien. The enterprise began in 1986 as an agricultural contracting operation.

The firm began importing machinery a few years ago, according to Timmy O’Brien, and started bringing in Metal-Fach machinery in January 2017. As well as the spreader, Egmont Agri also imports Metal-Fach tractor loaders and disc harrows – including the U740 and U740/1 harrows.

O’Brien said that, with years of ‘on-the-ground’ knowledge and experience, he “liked” Metal-Fach implements, noting that they “have strength where strength is needed”. He added that contracting was the perfect opportunity to test out such implements for himself, ensuring that they lived up to the billing. All Metal-Fach products come with a two-year warranty.

Though it’s early days yet, the Polish brand’s disc harrows have proven to be “very effective and seem to be working well”, O’Brien claimed, highlighting the machines’ maintenance-free disc bearings in particular.

O’Brien said that he intends to import more brands in the new year, saying that these incoming brands have never been seen before in Ireland. He added that build quality and keen pricing were key priorities in choosing these brands (which, as yet, remain tightly under wraps).

O’Brien added that Egmont Agri is the sole Irish importer of Metal-Fach machinery, and that the company is currently looking for dealers throughout the country.