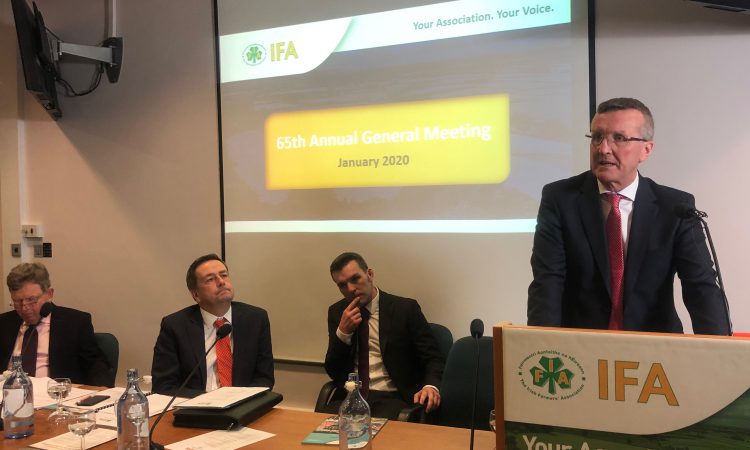 Tim Cullinan officially takes up the reins of the Irish Farmers’ Association (IFA) today, Monday, January 27, as its new president, at the association’s annual general meeting (AGM) in Dublin.

Cullinan, who was elected in December and will take over from Joe Healy, touched on many issues in his inaugural speech as IFA president, including: the upcoming general election; Brexit (which will happen this Friday, January 31); the Common Agriculture Policy (CAP); agriculture’s role in the environment; and beef prices, among several other issues.

Cullinan insisted that he would deliver on his election promise of “change”, saying: “I intend to move quickly and decisively.”

Below are the main points from the new IFA president’s speech:

“We are in the middle of a general election. The Taoiseach Leo Varadkar and other party leaders will be here tomorrow. We must give them a clear message. Farming and rural Ireland is being left behind.

“We must not allow any party leader out of this room without securing clear commitments. We have heard enough waffle. We need action.

“On Friday, the UK will leave the EU. There has been some loose talk that Brexit has been resolved. Well, it’s far from resolved.

“The negotiations around the new trade agreement between the EU and UK will be the most important in the history of this state…the only guarantee we have is an 11-month transition period. The threat of a bad deal, or of no deal at all, is still a real possibility….the EU needs to play hard ball.

“Of course, Brexit has already done a lot of damage to Irish agriculture. The BEAM [Beef Exceptional Aid Measure] scheme covered losses up to May 12, 2019. We need a second BEAM-type scheme for farmers who suffered losses since May 12.

“It’s unbelievable that our own minister [Michael Creed] left €25 million behind… But this money is still there. I am calling on the Taoiseach to get this money out to farmers before the election.

“The next government must fight for a bigger CAP budget. They cannot limit their ambition to maintaining the budget at its current level. At the very least, the budget has to cover inflation and the cost of any extra requirements on farmers.

“In 2019, CAP programmes and schemes injected €1.8 billion into the rural economy. But costs have gone up and prices have gone down. Farmers cannot survive with the status quo.

“I want to set out a clear target for the incoming government. Between EU funds and national co-financing, we need that 1.8 billion figure to be increased to at least €2 billion… We also expect this money to go to active farmers.

“We too want to see more money going to farmers with low payments. But the EU or the Irish Government will have to come up with the money. It cannot be taken off other farmers. They have given enough.

“We had a very successful event last week with Prof. Frank Mitloehner and others who brought rational and science-based evidence to the debate. The messages were clear: Methane is different to other greenhouse gases [GHGs].

“Prof. John Fitzgerald is the chairman of the Government’s climate advisory council. He spoke at our event and acknowledged that the way methane is currently accounted for is not appropriate.

“Farming is getting no credit for the carbon in our pasture and our hedgerows. This needs to be quantified.

“If the science has evolved, then the rules must change, and they must change now.

“We need the Government to appoint an independent food chain regulator. The EU has made provision for this.

“We need a new, fully independent office. It needs strong powers to tackle below cost selling, unsustainable discounting and misleading labelling and branding.

“The reality is that beef farmers will be gone if we don’t change things.

“We need an immediate price increase for beef farmers…we are still nearly 50c/kg behind the UK price.

“Even with a price increase, suckler farmers will need more support….IFA is campaigning for a payment of €300 per suckler cow.

“Sheep farmers also need more support. We want to see the payments increase to €30 per head.”

Cullinan touched on several other areas in his wide-ranging inaugural presidential speech, including insurance; rural crime; and the Fair Deal Scheme. 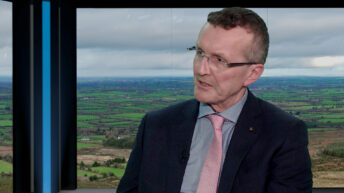