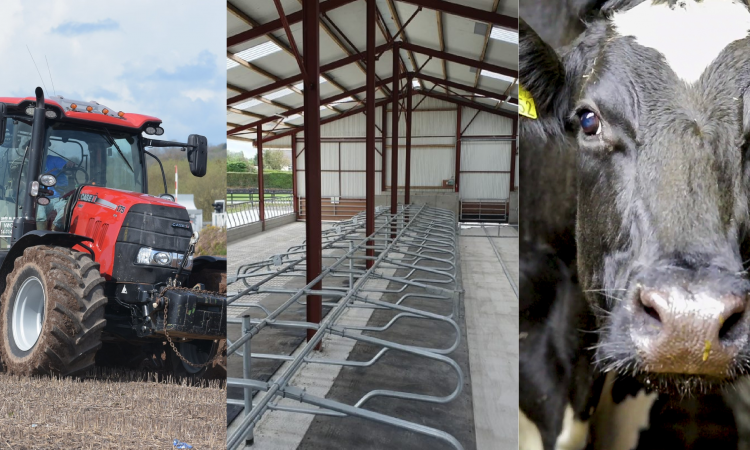 The agri food sector is a key driver of the real Irish economy, despite delusional Gross Domestic Product (GDP) figures and media prejudices.

Last week I assessed the anti-agriculture trope that asserts that Ireland’s increase in milk production – from five to eight billion litres annually over the five years since EU milk quotas were abolished – was driven by “industrial style” farming!

Yet we are emblazoned with an “industrial” moniker, while our neighbours are perceived to serenely wallow in the sunlit uplands of the UK.

Moreover, our average herd size of 78 pales by comparison with that of our global competitors. The average in New Zealand, for example, is 450 cows per herd. On the west coast of the US dairy farms have cow populations that number in the 1,000s and 10,000s.

The reality is that dairying in Ireland is while it has been growing and driving Irish economy output is not at the industrial-scale level…in much the same way as Dublin’s O’Connell Street is not the widest street in any capital city in the world!

That said, the growth in Ireland’s dairy farming sector does bring some environmental sustainability challenges. However, these must be managed in a balanced way – not in the midst of hype or hysteria.

Further examination of the typical ‘anti-agri’ stance exposes another significant misrepresentation of the facts. This is the notion that Ireland’s large-scale agri-food sector (while accounting for almost 300,000 jobs across the country) is not economically significant in the context of Ireland’s (somewhat misleading) GDP figures.

This, again, is dreadful nonsense – on a number of fronts.

Firstly, Ireland’s official GDP figures – as constantly espoused by Eurostat and our own CSO (Central Statistics Office) – are inflated by multinational price transfers and regional profits that should more accurately be accrued to other EU member states. When proper account is taken of this ‘pass-through money’ the Irish economy is seen to shrink dramatically.

The extent of this shrinkage is shown in this table (below) from Eurostat. It shows Ireland’s ‘artificial’ GDP figure, which places us as the second wealthiest country in the EU (at 189% of average EU GDP).

Alas, when transfers and profits (accruing to other regions) are removed Ireland is at just 95% of the EU average. 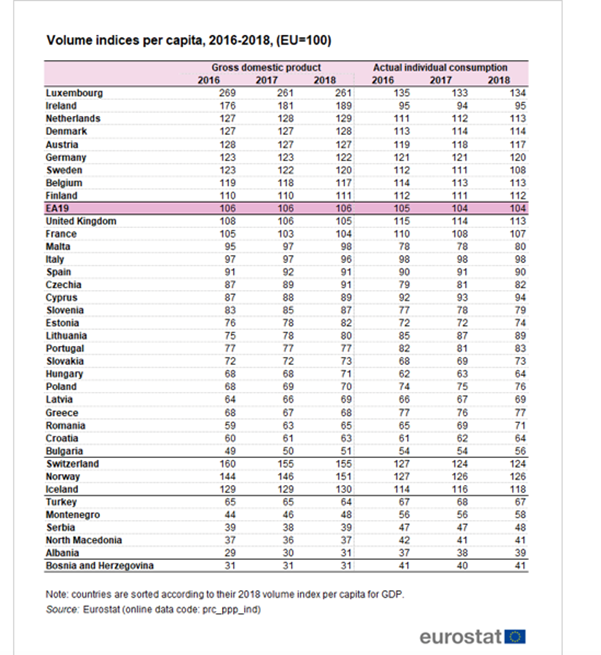 In many respects the GDP figure is akin to having a timeshare in a sunny (COVID-free) holiday villa for one week of the year, whereas the harsh economic reality is dictated by where and how we live for the other 51 weeks.

Not only does this reality paint a more sobering picture of the importance of the multinational sector; it clearly points to a much greater standing of the agri-food sector – a sector that supports one in eight jobs across the economy; a sector that pays for in excess of €15 billion worth of Irish raw materials, salaries and services each year.

Don’t take my word for it; this assertion is based on data from the Department of Enterprise, Business and Employment – specifically from its annual survey of expenditure in the Irish economy.

The magnitude of the impact of this expenditure is further underpinned in this table (below).

Irish CSO figures show that Irish dairy growth saw exports increase by over €2 billion (during the period shown). However, just as importantly, expenditure (in the Irish economy) rose from €1.8 to €3.9 billion. 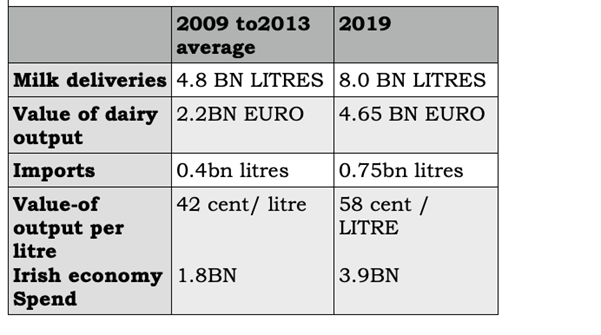 Very clearly, the gulf between the economic reality we inhabit and the official national accounts – the latter driven by a combination of ‘anti-agri’ prejudice and a delusional attachment to ‘formal’ economic accounting methods – is not just an academic argument.

When the Minister for Finance sat down to frame the budget, did he do so in the (reality-based) context of a €160 billion economy, where the agri-food sector accounts for 30% of transactional activity? Or did he do so in the context of the mythical (GDP-based) economy – with its apparent €320 billion turnover? Hopefully for all our sakes it is the former…

When we look critically at the actual domestic economy performance through Covid, notwithstanding a remarkable achievement in business continuity by the agri-food sector, real economic output has declined by between 20% and 25% – despite delusional attempts from some quarters suggesting that we still have relatively robust national accounts.

A clear and harrowing example of this decline is the accommodation and food services sector, which saw 140,000 (out of a total of 173,000 jobs in the sector) impacted by the lockdown by the end of April (source: CSO). While employment figures have now recovered somewhat, overall unemployment sits at 14.7 % – is almost 10% points higher than pre-COVID levels…with Brexit and the Covid recession to come!

Fact based reality, no matter how harsh, must prevail – because with reality comes clarity and balance.

Government budgets, like the government’s Climate Action Bill, and its responses to COVID and Brexit, must be fact-based to be balanced.

Fact-based means focusing on supporting the ‘domestic-demand; jobs-rich’ economy. It means protecting sectors of the real Irish economy that have a demonstrable impact – here in Ireland. 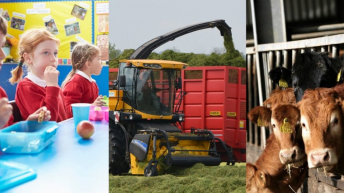