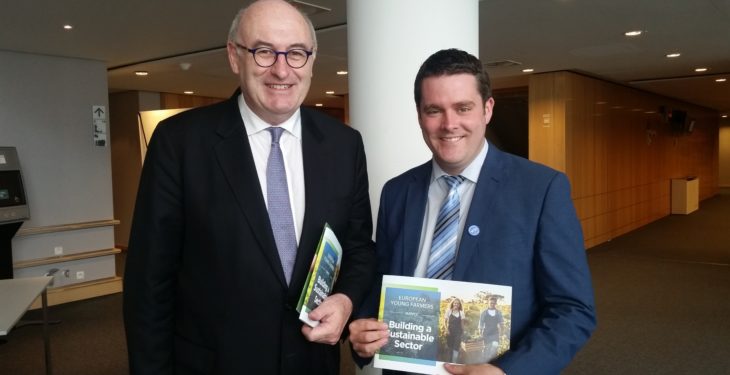 The European Council of Young Farmers (CEJA) considers the outcomes of last week’s discussion on the simplification of the Common Agricultural Policy (CAP) to be “largely positive”; however much more has to be done on the definition of an “active farmer“.

The agreements reached by MEPs and European Council negotiators on Thursday (October 12) established a provisional deal for a “simpler and fairer” EU farming policy after 2018.

Terms in the deal included boosting farmers’ bargaining power and making sure they are equipped to face risks. The omnibus regulation proposes that member states will have the choice to implement the active farmer definition or not.

CEJA vice president and former Macra na Feirme national president Sean Finan spoke on the matter, stating: “CEJA believes the definition of an active farmer must be formulated at EU level and not by individual member states.

The current definition is inadequate and a stronger one is needed in order to better target supports to farmers. While the simplification of the CAP is a top priority for CEJA, it cannot come at the expense of an effective farm policy.

European and Irish young farmers are very worried about any further dilution of the ‘active farmer’ definition as proposed in the Omnibus Regulation, according to the young farmers’ group.

The concern was highlighted strongly by Irish young farmers during the Macra na Feirme CAP 2020 consultations which took place earlier in the year.

CAP 2020 policy papers developed by both Macra na Feirme and CEJA reflect the concerns of young farmers in Ireland and across Europe.

Finan continued, noting: “A strong and more robust active farmer definition implemented across all member states is vital to ensure that CAP payments are directed towards active, business-minded, progressive farmers who are delivering public goods and producing high-quality, safe, fully traceable food to the highest environmental and animal welfare standards.

“The outcome of the omnibus proposal negotiations on the active farmer definition threatens this.”

CEJA welcomes the proposed changes to the (IST), enabling aid to be activated according to sector when income losses reach 20% instead of 30%.

Farmers’ losses will therefore be determined in terms of the type of production that was affected. They will receive compensation even if their other productions did not suffer.

CEJA also appreciates the possibility for young farmers to benefit from the young farmers’ top-up for the full five years – regardless of when they apply for it over this period and to increase the top-up from 25% to 50% of the basic payment entitlement.

Finan concluded: “We acknowledge the efforts of those involved in the negotiations to ensure young farmers are better provided for in CAP. The decisions taken in the negotiation on the omnibus regulation can under no circumstances serve as a starting point for the discussion on the next CAP.

“A clear definition of ‘active farmers’ in all member states is imperative for the future of the CAP and EU agriculture in general.”