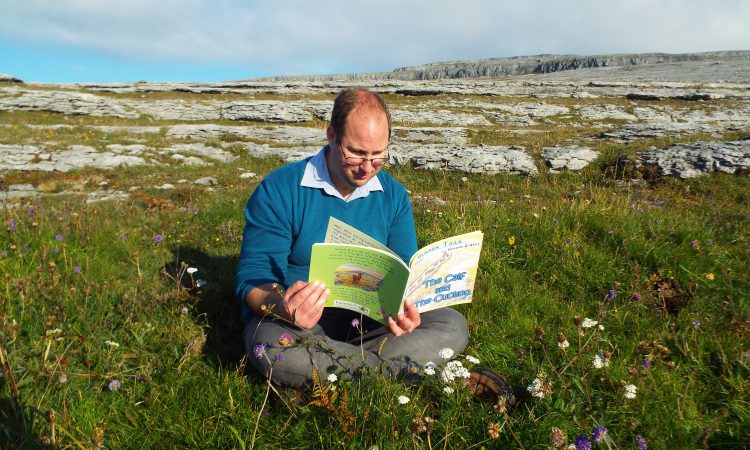 Having grown up immersed in the unique farming heritage of the Burren, Shane Casey was inspired to write a children’s book from his first-hand farm experiences.

Shane grew up on his family’s farm in Fanore, Co. Clare, on the Atlantic edge of the famous Burren, overlooking the Aran Islands. It is here that the story is set, between Blackhead mountain and the Caher valley.

‘The Calf and the Cuckoo’ begins at Blackhead, when Sarah, a young shorthorn calf, is born. Shortly after, she moves across to the Caher Valley where she has a chance encounter with a cuckoo. The cuckoo, Colin, has come all the way from Southern Africa to see the Burren flowers at Blackhead but Sarah has never heard of them.

How could it be possible that she has never seen or heard of the one thing the Burren is most famous for – its flowers?

Shane is the author of four other children’s books about Irish wildlife but said that his inspiration was a bit different for this one. “Sarah’s farmer plays a secondary character in the story,” he said.

“However, we find out in the end that his role is the most important for safeguarding the Burren as we know it. His way of life is shared by farmers across the Burren, including my own family.

There are parts of the story that many farmers will relate to, that maybe others have never experienced, such as the sweet smell when you open up a good bale of hay, or the satisfaction that comes when opening the gate to let cattle into fresh grass.

Shane has fond memories of growing up on the family farm in the unique setting of the Burren. “It was always quite busy. We had sucklers; sheep; horses; donkeys; poultry; and even a few goats. So every week brought something new,” he said.

“Like most farms, there were some jobs you loved, like checking for lambs on spring mornings, or getting bulls and rams ready for shows during summer, and some jobs you didn’t, like carting out the shed,” said Shane.

“Animals were moved mainly on foot around the farm rather than by trailer – it’s a large farm and well spread out – so it was fairly active though I often got in trouble for looking at the flowers in the ground all around me, rather than where the animals were going,” said Shane.

“I have a two-year old son myself now, and I’d love for him to have a similar childhood but there are some experiences that probably belong to the past now, like bringing tea and sandwiches down to the meadows where we made the small square bales of hay.

“There are other experiences that will hopefully last into the future, like walking the cattle to the winterage at the top of the mountain, even if you have to turn around then and rise the wall around a 200ac field.”

Shane continues to help out his mother and brothers on their farms in the unique landscape of the Burren. The response to his latest children’s book has been very positive. “Usually the most important response is from the children themselves.

“For this one, however, the response from the farmers of the Burren has been equally important, that I accurately represent their – our – farming heritage, and maybe tell a side of the story that hasn’t been captured before, particularly not in the many scientific papers that have been written on the subject,” said Shane.

‘The Calf and the Cuckoo’ is available to order on Burrenbeo’s online shop for €14, including delivery. 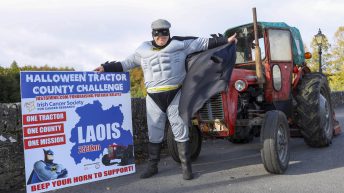 Batman takes to his Massey Ferguson for fundraiser