The European Parliament has voted for an amendment to the EU Common Commercial Policy that has been described as a rejection of the EU-Mercosur Trade Agreement in its current form.

The plenary session of the parliament voted yesterday (Tuesday, October 6) by 345 votes to 295 to add the amendment, which highlights the need for the agreement to ensure compliance with the standards of European production and fair competition.

According to French MEP Marie-Pierre Vedrenne, who was involved in tabling the amendment, the result of the vote indicates “we cannot ratify the Mercosur agreement as is”.

Welcoming the parliament’s vote, Irish Farmers’ Association (IFA) president Tim Cullinan said the result is “the latest statement of opposition to a deal that fails the test of meeting EU standards”.

Cullinan also highlighted the comments from the German agriculture minister Julia Klochner last month, who suggested that she did not see the agreement getting EU member state support in its current format.

The IFA president also highlighted that a recent report from Oxford University underlined that the agreement “fails the sustainability test”.

“The commission was explicit that Mercosur could not go ahead if Brazil failed to meet environmental standards,” Cullinan said.

Over the last number of months, the EU-Mercosur Trade Agreement has hit a number of other stumbling blocks.

In June, the Dutch parliament asked its government to notify the European Commission that the Netherlands would withdraw its support for the Mercosur agreement, citing an increase in unfair competition for European farmers and a lack of enforceable agreements on protection of the Amazon.

“I would be deeply hypocritical of the EU Commission to pursue a trade deal that so clearly conflicts with its own policy… Commission President Ursula von der Leyen cannot stand over this deal and should send a clear signal that the EU will not do business with Brazil when it continues to flout the law,” said IFA livestock chairperson Brendan Golden. 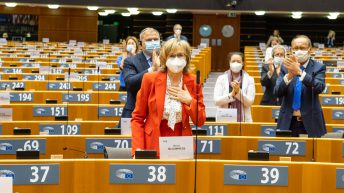