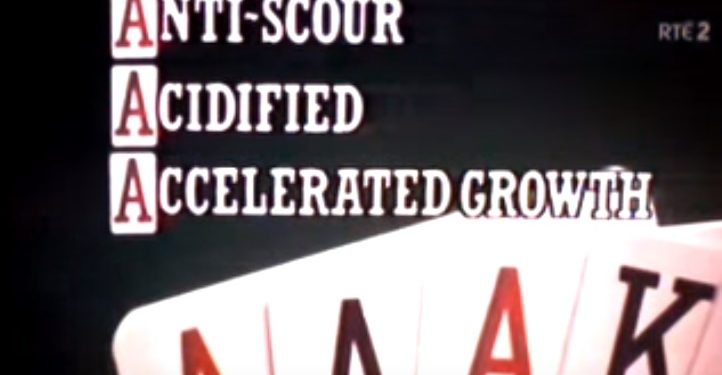 How many farming ads for scour treatments for cattle and or doses for sheep can you remember from your childhood?

Some people will never understand how good the Triple A Golden Maverick ad for milk replacer was or how the ad for Systamex to wipe out worms was.

Here is a look back at some of the most memorable farming themed adverts from Irish TV and abroad.

The days of milk replacer being advertised on TV have gone by but who could forget the ad for Triple A Golden Maverick which was shown regularly in the late 1980s?

The voice over warns about “gambling with milk replacer” and consists of a group of men playing poker with one man holding three Ace cards representing the “Triple A” in Golden Maverick – for Anti-scour, Acidified, Accelerated growth.

How could you forget it!

Systamex is another advert that wouldn’t be seen advertised on the TV now a days. It is a worm drench for cattle and sheep worm.

Aired in 1984, the ad told farmers that Systamex “wipes out hoose, tapeworm and their egg – totally.

The ad created by Richard Groups, which contains a speech made by Paul Harvey in 1978 at the future farmers of America convention which is played along with rural American photographs.

In collaboration with the National FFA (Future Farmers of America) Organisation Dodge agreed to donate $100,000 for every 1,000,000 views on YouTube up until the ad received $1,000,000. The goal was reached in five days.

The ad consists of two Angus bull robbing the farmers Toyota after they got a whiff of the cows next door.

One bulls says to the other ‘Hoof If’ as they speed away in the jeep. Not wanting to arrive empty handed, they drive through a barn and pick up a couple of bales of hay.

The next thing to stop them in their tracks is the cattle stop, but bulls will be bulls and they find a way around to get to the lovely Jersey cows.

This ad was banned in New Zealand for having the phrase ‘sheep shagger’ in it.

This ad was shot over two days in Glenmacnass, Co. Wicklow and was aired in 2009. The advert shows all the things that Kerrygold and Ireland stand for: family, generations, nature and a deep connection with the land.

There’s also a great Irish mammy in it who says “they export all our good stuff” as her son is moving to Berlin with his wife. It’s a classic.

This ad shows the happy Kerrymaid cows. Kerrymaid is the creamiest of all dairy spreads because of the pampering the cows receives, according to the brand.

The ad received a lot of positive letters back from the consumers of all ages. It also received the 2005 Silver Institute of Creative Advertising and Design (ICAD) award.

“And they all grazed happily ever after”

Chipotle has produced two very effective adverts in recent years which have both received over nine million views on YouTube.

Chipotle is a fast food chain which uses fresh and sustainable ingredients and beef, pork and chicken produced without antibiotics.

Their aim with these adverts was to try make its customers more aware of sustainable ingredients they use in their products.

“The Scarecrow” has been praised as great piece of marketing and a beautiful work of art, and applauded for its anti-factory-farming message.

It has been viewed over 16m times on YouTube. The film is meant to highlight issues like the overuse of antibiotics, harsh confinement of animals, and the extent to which food is processed.

“Back to the start” is another advert created by Chipotle. This shows a farmer with his wife and their child starting off the farm.

The farmer slowly builds his farm up and turns it into an industrial type farm, but then he decides it becomes too much and the old way was a better way.

This is highlighted when he releases all his animals and takes down all his sheds. At the end you see the farmer’s son walking over to one of the pigs, representing how he will continue the farm in a sustainable way.

Coldplay’s song the “scientist” accompanies the advert. The proceeds from the download of the song went to the Chipotle Cultivation foundation.

No compilation of farming ads would be complete without the Specsavers sheepdog ad!

This is a UK ad which feathers the story about “Colliewobble”, the story of a sheep farmer who we see has poor eyesight due to his poorly sheared sheep and Border collie sheep dog.

The ad was filmed in Saksun in the Faroe Islands between the Shetland Islands and Iceland.

The ad below takes inspiration from Braveheart.