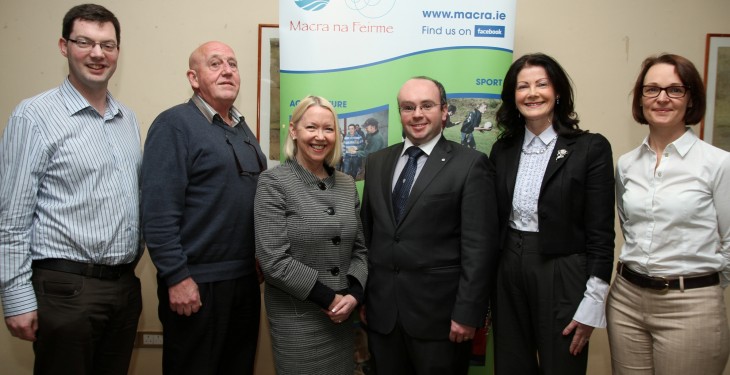 There is a need and a willingness from all stakeholders to collectively address the complex issues of alcohol abuse amongst young people. This was the key finding from Macra na Feirme’s unique and interesting seminar, ‘Drink, Drama, and Debate’, in Limerick last Saturday, the 22nd March.

Following the event, Kieran O’Dowd, Macra na Feirme National President, said, “It is clear that if we really want to change the way that alcohol is consumed and abused in Ireland then we must look at the various factors involved such as availability, price and also why people feel the need to drink to excess on a night out. When it comes to policy formation the alcohol industry should not be involved due to the huge conflict of interest. The key role for them is in the implementation of such policies to promote good public health.”

The event, which took place at the Castletroy Park Hotel, started with a drama written, directed and acted out by members of Macra. This was a gritty and sometimes ‘in your face’ portrayal of how alcohol is so widely available to children and youths as well as the acceptability of the excesses of alcohol. It portrayed the negative impact alcohol can have with devastating consequences upon relationships, work and family.

Having set the scene so well, it was over to the panel of experts to give their perspectives on the topic ‘Alcohol Abusing Youth or Youth Abusing Alcohol?’

The varied panel of speakers ensured a diverse range of views were presented. Katherine D’Arcy of IBEC’s Alcohol Beverage Foundation of Ireland presented the drinks industry as a responsible industry making a significant contribution to jobs and wealth in Ireland. While Professor Mairtin O’Fathaigh, formerly of UCC, said that people need skills to deal with the management and control of alcohol. ‘Self-management’ is a key skill that can be learned and needs to be promoted, he contended.

Fionnuala Sheehan of Drink Aware stated from the outset that her organisation, funded by key players in the drinks industry, was interested in reducing alcohol-related harm. She gave a lengthy insight into the drinking culture as it evolved in society and portrayed alcohol use as a ‘ritual to synchronise the emotions’. Evident from their presentation, Drink Aware’s emphasis was upon encouraging the individual alcohol consumer to behave more responsibly.

Mary Cunningham, Director of the National Youth Council of Ireland, said that NYCI’s interest in alcohol consumption was that of its negative effects upon public health, particularly amongst our young population. She flatly challenged the stance of Drink Aware and the drinks industry saying that ‘primary responsibility is with the drinks industry’. She claimed that the majority of Irish people who drink, drink at levels that damage their health. She said that for every €1 the industry spends upon addressing alcohol abuse, it spends €40 on advertising. ‘Personal responsibility is submerged by the might of the industry’, she contended.

Furthermore, Mary Cunningham was adamant that the drinks industry should not have any role in developing public policy in relation to alcohol.

Kieran O’Dowd, Macra’s National President, as chairperson, opened the debate to the audience which consisted mainly of young Macra members including most of Macra’s national council members. James Healy, Macra’s Munster vice president, said, “The easy availability of cheap alcohol, primarily through the off licence or supermarket channels, was leading to harmful drinking amongst young people”. This was echoed by Eamon Cassells from Meath Macra who said that the price differential is now so big that it encourages ‘pre-drinking’.

In response, Katherine Darcy representing the drinks industry said that a culture of ‘pre-drinking’ or ‘prinking’ now exists and that the industry would support a minimum prices order that existed up to 2006.

Mary Cunningham of NYCI noted that currently society’s attitude normalises excessive drinking. She said that the smoking ban had significantly changed attitudes and that similar control measures for alcohol purchase and consumption are now required in Ireland.

Caitriona Fox, Avondhu Macra member, and Una Ryan from South Tipperary Macra both referred to how strong peer pressure was on young people, coercing them to drink to excess. Caitriona Fox said that “Drink Aware was a cover up not a clean-up”.

In response, Fionnuala Sheehan of Drink Aware said that they were the only organisation in Ireland addressing awareness of alcohol misuse and said that education is critical to effecting change.
Sean Finan, Macra’s National Treasurer noted that, “Alcohol related harm is costing the Irish exchequer €3.7 billion annually and that the industry generates €2.0 billion in taxes, which is not sustainable”.

In one of the most astonishing contributions to the debate, a primary school teacher and Macra member revealed that on a Monday morning when her pupils, aged between 6 and 8 years, were telling their news some of them described spending their Sundays in the pub with their parents while others described being permitted by their parents to have a taste of an alcoholic drink in the home.

Kieran O’Dowd, concluded, “The debate has definitely identified a number of key issues that must be addressed by the government in any approach to dealing with the harmful effects of alcohol use and abuse.”