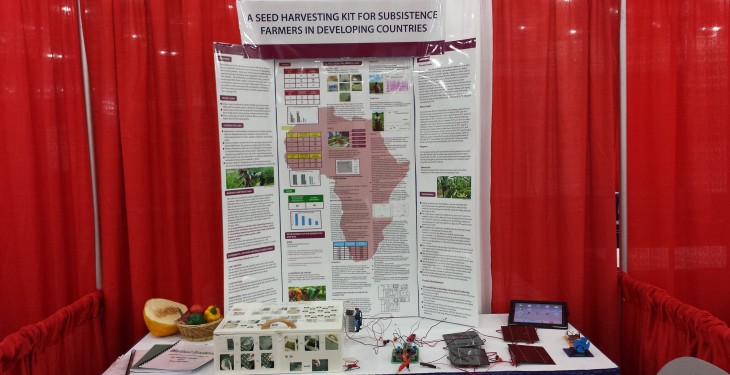 A seed harvesting kit for subsistence farmers in developing countries will be on show at the BT Young Scientist in January.

This project has been developed by Megan Duffy and Zoe McGirr, year 11 students at Oakgrove Integrated College, Derry, under the guidance of their science teacher Mrs Gilmore and science technician Mrs Molloy.

This project set out to develop a low cost kit for subsistence farmers in developing countries to save seeds from crops for replanting the following year.

Every year, farmers in Africa have to undertake the expensive process of acquiring and buying seeds for planting to feed their families. By developing successful seed-saving techniques, it was hoped that there could be a significant cost reduction, as farmers could extract and identify viable seeds for replanting.

The project, if successful, would encourage self-sustainability in farming so that these seed saving techniques could be implemented on an on-going basis, its developers say.

Initially, suitable protocols were established for saving the seeds from melons, tomatoes and peppers. The next step was to devise a kit, which contained all of the necessary equipment, to successfully extract, dry, preserve and germinate the seeds from these crops.

The kit needed to be solar powered thus utilising a plentiful and renewable energy source available in Africa. Once the optimum temperature was determined for the equivalent stage in the process, the kit was designed to regulate the temperature automatically.