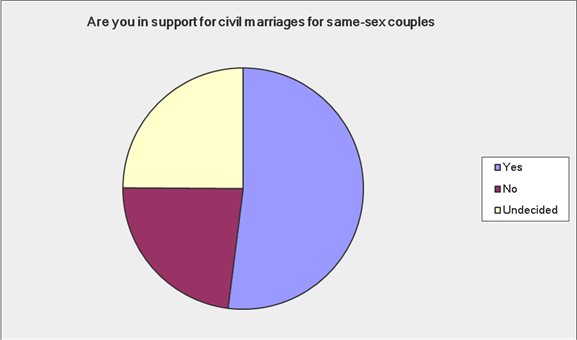 In a survey of 247 members of Macra na Feirme, the Irish young farmers organisation, 52% have come out in favour of civil marriage for same sex couples. A further 24.9% state that they are still undecided on the upcoming Spring 2015 referendum. Only 23.1% said they don’t support same sex marriage.

In reaction, Macra National President, Kieran O’Dowd, said: “It is indicative of how rural society is changing that more than half of young farmers surveyed by Macra are in favour of same sex marriage. Young farmers, no more than any other young people, are not immune to the shifts of the sands of time.”

Macra na Feirme will be at the National Ploughing Championships next week talking to young farmers about agricultural issues, farm safety and land mobility. The winner of the FBD Young Farmer of the Year, Sean O’Donnell, from Mayo will be on the Macra stand on Tuesday to chat with visitors.

This year Macra‘s President and the winner of the FBD Young Farmer of the Year, Sean O’Donnell, from Mayo will be on the Macra stand on Tuesday.