Teagasc research has found that just a €20/t increase in feed costs can hit net margins in young bull production by as much as half.

At the Irish Grassland Association’s recent summer beef tour, Robert Prendiville of Teagasc outlined its research in Grange into the three different calf-to-beef systems and the impact of feed costs on the overall profitability of the farm.

The net margin on a 20ha farm was just €5,360 for the 15-month bull system prior to the increased concentrate cost.

Teagasc found that because this system is so heavily reliant on concentrates if it just goes up by €20/t, net margins decrease to €2,640. A drop of 49%. 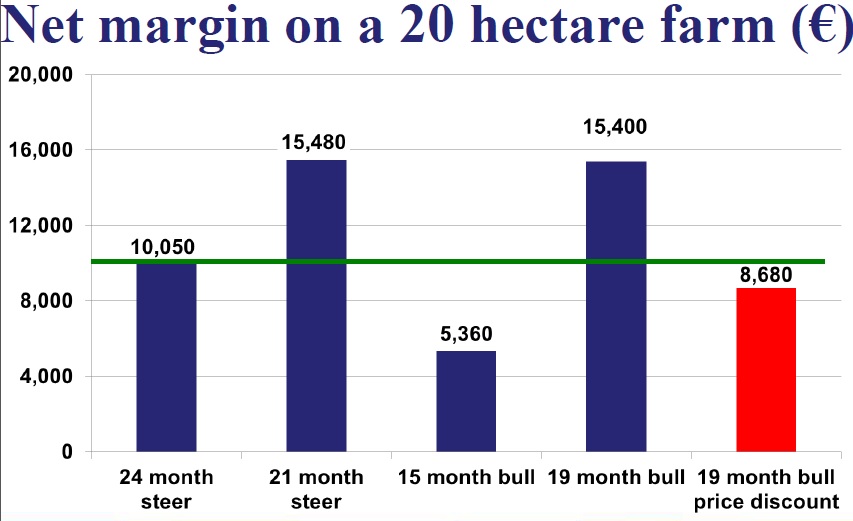 According to Robert Prendiville farmers need to be cognisant of the pitfalls of some of these systems.

“The big one for dairy bulls is meal price, if it increases by €20 it has a lesser impact obviously on the extensive systems with grass based finishing.

Prendiville said for the 15-month bull system only calves go to grass. They are housed in November and built up onto ad lib meal over three weeks.

The bulls get an ad lib finishing period for 200 days. Calves which are February born are killed in May and those born in March are killed in June.

Prendiville said the concentrate input during this period is 1.8t or nearly 2t life time input for that system. He outlined that high concentrate input levels were necessary for the animal to meet the desired specification at slaughter.

He noted that reaching the 275kg deadweight target was difficult to achieve even with high concentrate input levels.