The Republic of Ireland has retained its fourth place on the EU deadweight cattle prices league table, the latest figures from the Livestock and Meat Commission (LMC) Northern Ireland show.

This latest price for the Republic is 28.1c/kg above the EU average price of 400.6c/kg, the figures show.

In Northern Ireland, the LMC says that the average R3 heifer price for the week ending June 28 was 477.0c/kg.

This places the Republic 48.3c/kg lower than the equivalent price in the North, it says.

The UK retained the top spot in the EU league table of R3 heifer price with an equivalent price of
488.8c/kg in the week ending June 28, 2015, the LMC says.

The increase in the UK R3 heifer price resulted in the UK/EU price differential widening from 70.1c/kg in the w/e May 31 to 88.2c/kg in the week ending June 28, it says. 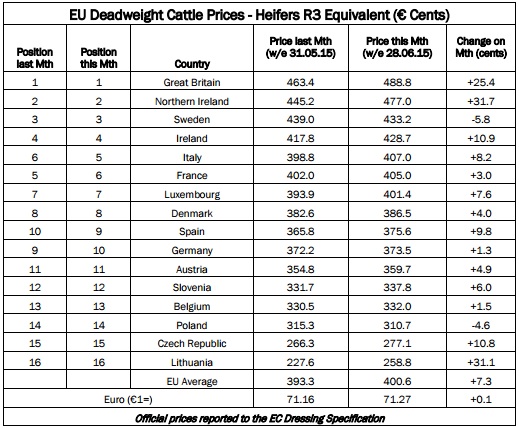