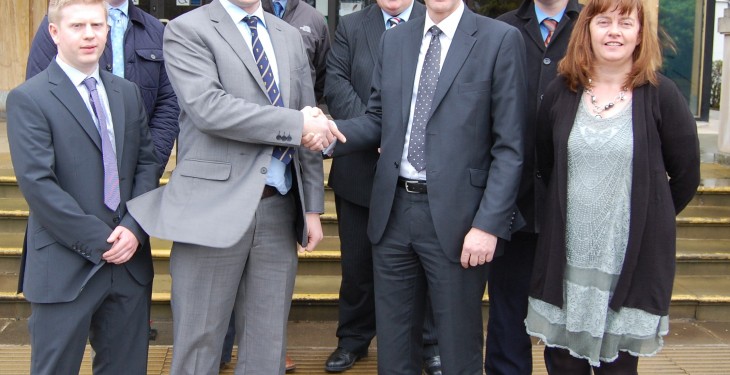 A delegation from the Young Farmers Clubs of Ulster (YFCU), headed up by President Martyn Blair, met with representatives of the Department of Agriculture and Rural Development (DARD) Policy and Economics Division recently in Dundonald House, Belfast, to discuss the details of the additional support measures that will be available for young farmers under the new CAP arrangements.

This was the first time that representatives from the YFCU had met with DARD officials on matters of this nature. The grouping of department officials in attendance was led by DARD’s head of policy and economics division, Norman Fulton.

Under the new CAP arrangements, a top-up payment of 25 per cent for a maximum period of five years will be made available to young farmers who are no more than 40 years of age in their first year of application.

Commenting after the meeting, Blair said: “We had a very good get-together with the DARD team. Discussion centred on the training qualifications that will be required for the new CAP measures. We also wanted to know if young farmers who have received support courtesy of the current CAP measures, will be excluded from the measures that will be implemented in 2015.”

Responding, Fulton said that a lot of the detail regarding the full implementation of the new CAP measures had still to be worked through.

He added: “We would aim to ensure that the attainment of any training qualifications that may be required for the new young farmers support measures would be made as flexible as possible. Attendance at night classes and linking the envisaged measures with the various Challenge Programmes would be obvious options in this regard.  These are decisions that still have to be taken.

“However, it is already clear that the young farmer receiving the new CAP support measures must be the head of holding. The YFCU deputation discussed the relevance of farm partnerships in this context. This is a matter that we are looking into at the present time.”