Bad weather in store for West and North this week, says Met Eireann 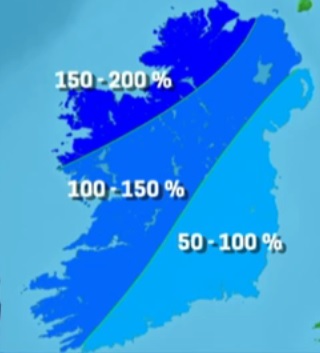 In general Met Eireann is forecasting a a very mixed week weather wise, with the west and north set to experience the worst of the conditions.

Met Eireann says the days cold wintry and showery and there will be frost on some of the nights.

It notes that rainfall amounts were well below average last week, however there will be a change this week although amounts will remain below average in the east, in the north west it will be well above average.

Tomorrow: Tuesday, will be a cloudy, mild and windy day with temperatures of 10 to 12 degrees in strong southwesterly winds. Scattered outbreaks of rain will be heavy and persistent at times. Skies will clear during the late afternoon and early evening and it will turn much colder. Winds will veer westerly and will become very strong in the northwest.

According to Met Eireann, the outlook for the week is for Tuesday night to be cold and windy with clear spells and passing showers. Lowest temperatures zero to 4 degrees in strong to gale force westerly winds.

Wednesday: Met Eireann says Wednesday will be a very windy day with widespread gales and a possibility of storm force winds for a time in parts of the west and north with damaging gusts. There will be sunny spells but passing heavy showers of rain or hail also. Afternoon temperatures of 5 to 9 degrees and feeling cold in the wind. Cold, windy and showery Wednesday night (too windy for significant frost).

Thursday: Cold and blustery with sunny spells at first and just scattered showers. Heavy rain and gales will move in from the Atlantic during the day with a risk of snow over parts of Ulster.

Friday: Very cold and windy. Sunny spells in the east and southeast but heavy wintry showers generally. Highest temperatures only 3 to 7 degrees in blustery northwesterly winds.

Outlook for the weekend: Very unsettled.