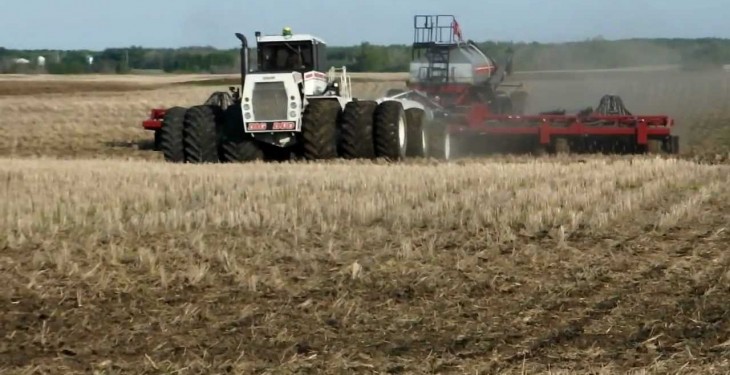 The world’s largest tractor ‘Big Bud’ currently lives in a museum in Iowa, but it was originally custom built for the Rossi Brothers, cotton farmers in California.

This machine is called Big Bud and it holds the record for being the largest farm tractor in the world. It’s 8.23m long and 6.1m wide – probably not too many gates in Ireland it could fit through, and has a height of 4.27m and pulled an 80ft cultivator.

Needless to say it was not in mass production, but was built to order for a farming family in Montana. With an upgraded engine its final horsepower was 900hp, and with a full fuel tank Big Bud weighs 50 tons.

It was built in 1977 for a single farm in America, producing cotton, and is a testament to the late 1970s boom in the US by Harman’s Northern Manufacturing Co. (now Big Equipment L.L.C.) which specialised in custom-build machines.

It wad designed by Harman’s and cost approximately $300,000. It was made for the Rossi Brothers; cotton farmers of Bakersfield, California, where it was used for 11 years before it was sold to farmers in Florida and eventually it was bought by the Williams Brothers of Big Sandy, Montana, in 1997.

It was used on the Williams Brothers’ farm to pull an 80ft (24 m) cultivator, with which it was able to cultivate one acre/minute at speeds up to 8mph.

Today, the Big Bud 747 tractor is displayed at the Heartland Museum in Clarion, Iowa.