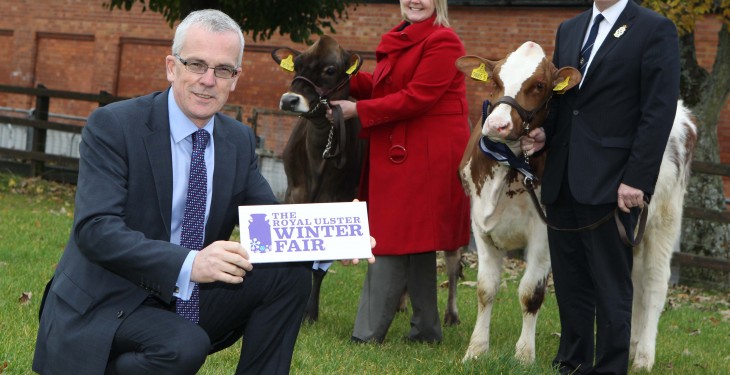 On the back of the continuing success that is the Royal Ulster Winter Fair, the Royal Ulster Agricultural Society (RUAS) is giving active consideration to the feasibility of converting  the dairy spectacular into a two-day event.

“In order to facilitate this additional demand, we are making available an extra 1,200 square metres of exhibition space courtesy of a third marquee.

“It is also our intention to write out to all Winter Fair exhibitors, seeking their view on this year’s event. As part of this exercise we will also seek views from the trade regarding the possible merits of extending the Winter Fair into a second day.

He continued: “This year’s event will take in three separate locations, joined by walkways. In order to facilitate the viewing of the livestock by visitors, we are putting in place a specific walkway from the new exhibition area to the cattle lines in the Alexander Hall. Livestock exhibitors will have their own, bespoke walkway from the stalling area up to the arena.

McDonald went on to confirm that livestock entries for the 2013 event are on a par with previous years. “It really is a case of the Winter Fair going from strength to strength,” he commented.

Looking to the future, McDonald said next year’s event will be held at the King’s Hall complex in Belfast. “We have not finalised arrangements beyond that date.”

Commenting on the raft of other issues pertaining to the future development of the RUAS, McDonald made the following points.

“Our plans to develop Balmoral Park at the Maze:Long Kesh site remain on track. We have committed to an agreement with the Office of the First and Deputy First Minister of the Northern Ireland Executive, which commits us to developing Balmoral Park. Once this has been undertaken, we will sign a 999 year lease on the property, which will give us total ownership of the site and everything on it.

“The decision not to go ahead with the Peace Centre has no bearing whatsoever on the shape of our future plans for Balmoral Park.”

On the issue of the proposed road linkage between the new Balmoral Show site and the M1 motorway at Sprucefield, at the very heart of the arterial route between Belfast and Dublin, the RUAS ceo confirmed that planning permission for this development has been sought by the Maze: Long Kesh Development Corporation.

Regarding the commercial development of the King’s Hall site, McDonald indicated that building work on the private housing project, which has been planned for the back end end of the site, would get under way before the end of 2014.

“This is the crucial link within the overall development plan, put in place by the society. The monies made available from the work undertaken at the King’s Hall will fund the development of Balmoral Park.”

McDonald concluded: “My total focus remains that of ensuring that all our plans for the future are implemented as quickly as possible.”