Winter wheat and oats are at flag leaf to head emerging, while winter barley crops are well into flowering. In general, winter cereal crops are showing good promise, despite the very high disease pressure due to the wet weather.

This is according to the latest tillage crop report by Teagasc that in wheat the yield forming leaves are quite clean, while in barley the plant populations are good to high.

Teagasc report that spring barley crops are tillering to 2nd node. It says Rhynchosporium is common in March drilled barley and beginning to increase in April drilled crops. Isolated cases of mildew are also reported, while spring wheat and oat crops remain generally free from disease.

Teagasc also point out potato crops need careful monitoring as blight is being reported over the past ten days. 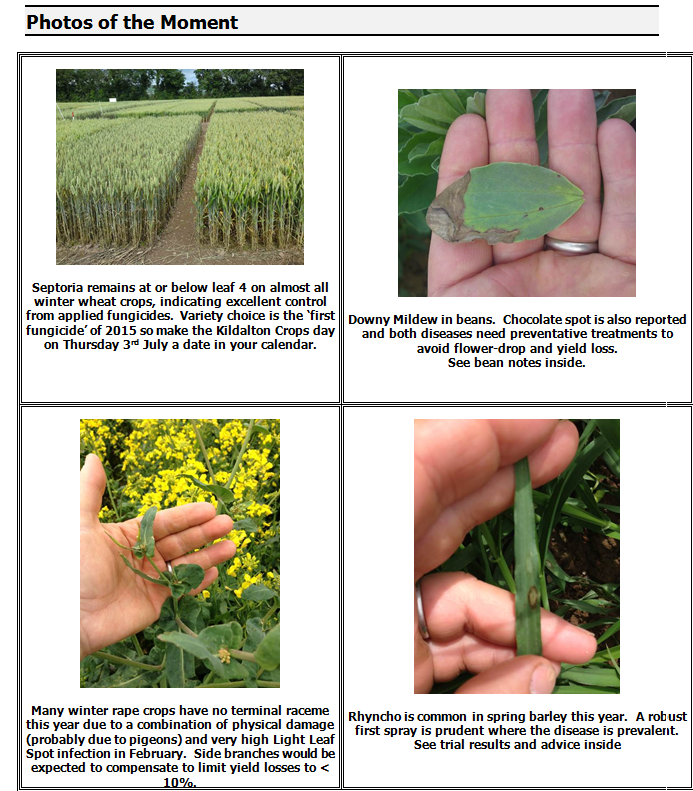 Most crops are at flag leaf to boots swollen with heads just appearing in advanced crops. At this stage, most wheat crops are showing good promise with high plant populations and healthy green canopies. Despite the recent wet weather and high Septoria inoculum at the base of all crops, the yield forming leaves (1-3) remain free from disease, indicating good efficacy from fungicides.

All winter barley is headed to post flowering. There are some reports of ”fresh” Rhyncho in Cassia and mildew in Volume. Crops look promising, especially where plant populations are high.

Crops coming to the end of flowering and are now in the middle of pod fill. Many crops have higher levels of Light Leaf Spot than was expected earlier in the year. In many cases the main raceme is damaged but side branches will compensate somewhat for the losses.

Beans have grown strongly in recent weeks with the first flower buds appearing in many crops now. Wet weather diseases are appearing earlier than usual with reports of Chocolate Spot and Downy mildew from most areas.

Spring barley ranges from mid tillering to gs 32. Spring wheat and oats are at gs 31-33. All crops have grown strongly over past few weeks but spraying operations have been delayed by the recent wet conditions. Rhyncho is common in barley with high levels in early drilled crops but later crops are now showing symptoms. Leatherjackets and to a lesser extent slugs were commonly reported this spring, reducing plant counts in many fields.

There was a large increase in grassland weed herbicide applications in 2014. Where control opportunities were missed, wait until grass and weeds re-grows after silage conservation and treat then.

Many Dow herbicides are coming to the end of their use up period on farms.

Most maize under plastic is just breaking through the plastic cover but early drilled crops are almost fully through. Open crops have 2 leaves and will need weed control in the next week as weed germination is high given the wet, mild conditions.

Crop growth has been good over the past two weeks. Crops range from cotyledon to the first pair of true leaves half expanded. Pest problems have been sporadic with leather jackets the most problematic. For most crops the second herbicide application is due to be applied in the coming week.