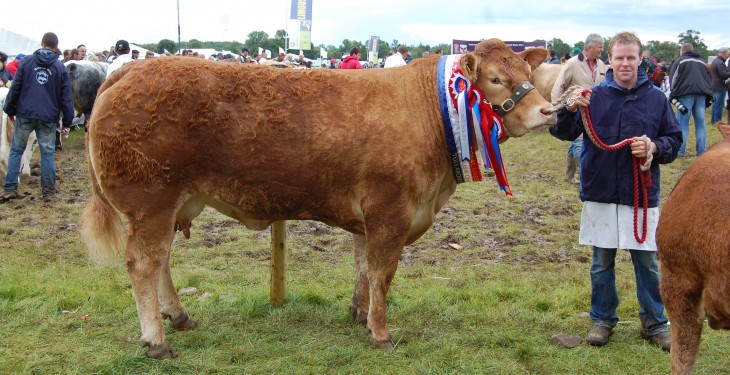 Co. Meath breeder William Smith had ’another tremendous day at the office’ courtesy of winning the Limousin Supreme Championship at the Tullamore Show 2014 with the elite young cow Millbrook Ginger Spice.

But this mere statement of fact does not do justice, in any way, to the tremendous impact the Kells’ man is having on the development of the Limousin breed on this island.

Earlier this year, William turned up at Balmoral Show and scooped the Supreme Inter Breed Beef Champion with Gingerspice. That was his fourth Inter Breed Accolade in a row at the HQ of the pedigree cattle world in Northern Ireland: the last two won with the aforementioned Gingerspice and the first brace with an older cow Millbrook Celine. And, of course, William is no stranger to success at Tullamore.

“We have had another great day,” he told Agriland while waiting to receive his Tullamore Gold Medal from MEP Mairead McGuinness.

“Gingerspice is currently in calf to the bull Ampertaine Commander. All being well she will calve down without a hitch next Spring and we will see how she gets on from there.”

While fully aware of the tremendous successes that he has achieved at Tullamore, and other leading shows, William is quick to confirm the role played by previous generations of the Smith family – particularly his father John – in giving him the inspiration to breed elite quality cattle.

“Traditionally we were Hereford breeders and subsequent to that we invested in Simmental stock,” he explained.

“Back in my father’s day we also milked cows and kept a decent size herd of commercial sucklers.

“Then about 30 years ago, I was given the opportunity of making a mark within the business. From the outset I wanted to get involved in a new breed with a future. Obviously, we wanted cattle with excellent beefing qualities. But we also recognised the need to breed cows with good mothering abilities and a docile nature. And it was obvious to me that Limousins ticked all the boxes in this regard. What’s more, I feel that the breed is as relevant today, as it was back then.”