Speaking at the Teagasc Animal & Grassland Research and Innovation Centre in Grange Co. Meath, he said that increasing grass production requires good soil fertility and perennial ryegrass dominant swards, while a good farm paddock system and the use of grass budgeting tools will increase pasture utilisation.

To maximise animal performance, good fertility and reproductive performance is required, with the objective to produce one calf per cow per year.

The breeding policy must also aim to maximise live weight gain. Economic analysis of suckler calf to beef systems in Grange has shown that, where individual animal performance is high, stocking rate is the key driver of profitability,” said Dr O’Riordan.

Production efficiency improvements are possible for suckler farming systems in Ireland and can lead to substantial increases in profitability was the main message broadcast at the event which was sponsored by FBD Trust. 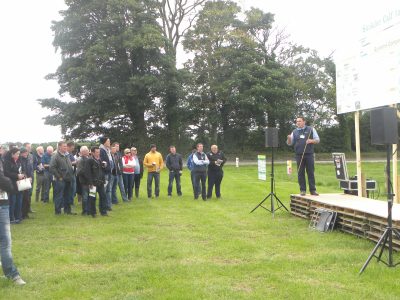 Speaking at Beef 2016, Teagasc Director, Professor Gerry Boyle underlined the national economic importance of the cattle and beef sector, not just to the agricultural sector but to the entire economy.

Annual beef output exceeds half a million tonnes, with 90% exported to EU and international markets. The emphasis at today’s Beef 2016 event is on those profitable technologies that will underpin the future sustainability of the beef sector.

“Teagasc has a central role in the development of the sector and today’s successful open day in Grange is an excellent example of the hard work, dedication and commitment of Teagasc to Irish farming.

“The need for a strong input from Teagasc is greater than ever particularly in assisting the development of farm enterprises, achieving greater uptake of new technologies, delivering research and environmental advice on farms, educating and training students and adult farmers and supporting science-based innovation in the agri-food industry,” said the Minister. 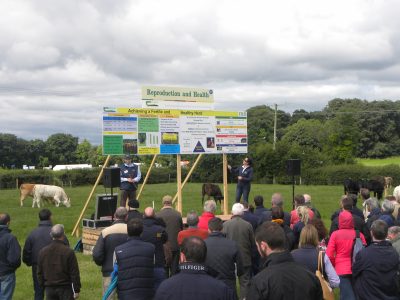 Pearse Kelly, Head of the Teagasc Drystock Knowledge Transfer Department, said: “Various production systems can be employed on dairy calf-to-beef enterprises depending on the breed type, gender and finishing system.

“The most successful systems are those that optimise animal performance from grazed grass and achieve a high proportion of total life time gain from grazed grass. Profitability is vulnerable to increases in concentrate input costs and calf purchase price, as well as the selling price of beef.”

A major farm safety exhibition highlighted the dangers on farms and the risks faced by farmers, their families and those working and visiting farms.

The reaction from the visiting farmers was very positive with the majority agreeing that the event was educational and had opened their eyes to new means to make their own farm more profitable.

“I found the dairy calf to beef and grassland management stands the most interesting so far, it’s very well laid and we got a nice day for it,” said John Nix from Newcastlewest Co. Limerick.

Ambrose Lavin from Swinford Co. Mayo and his 10-year-old son Conor make an effort to come to an event similar to Beef 2016 in Grange once or twice a year.

“We do the ploughing and we try to come to an event like this every year, they’re always educational, I thought the idea of bringing back the age of the heifer, lets say, before she starts her career was the most interesting point so far. My son Conor reckons we need to start making paddocks at home as well,” said Ambrose.”