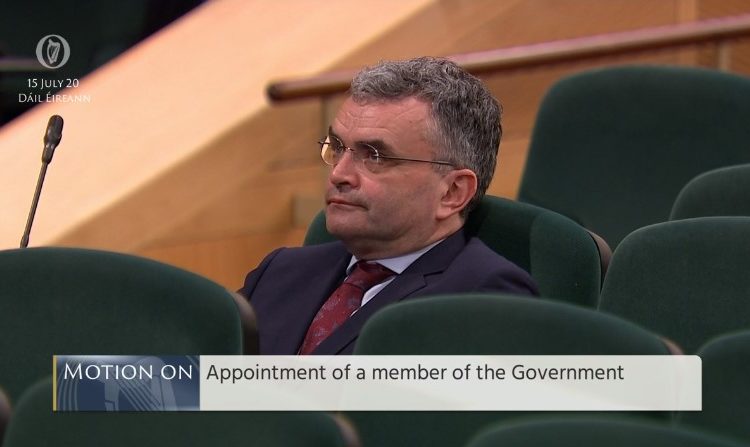 Mayo TD Dara Calleary has today, Wednesday, July 15, been appointed as the new Minister for Agriculture, Food and the Marine.

He will take over the ministerial role following the removal of Barry Cowen from the position, as announced in the Dáil yesterday evening, Tuesday, July 14, by Taoiseach Micheál Martin.

Calleary was believed to be one of the front-runners for taking over as minister and the decision was announced this afternoon by the Taoiseach.

The Fianna Fáil deputy had been appointed to the junior cabinet position of government chief whip (in the recently-formed government), prior to being announced as the new Minister for Agriculture.

A native of Ballina, Calleary was first elected as a TD in 2007.

In 2009, he was appointed Minister of State at the Department of Enterprise, Trade and Employment with responsibility for labour affairs.

Calleary was re-elected to the Dáil in 2011 and 2016, serving as Fianna Fáil spokesperson on justice, jobs, enterprise and innovation and later on, public expenditure and reform.

He was appointed deputy leader of Fianna Fáil and director of policy development in 2018.

This appointment comes after the most recent development in the controversy surrounding Barry Cowen’s road traffic offence from 2016.

In his speech to the Dáil last night, announcing the removal of Cowen from his ministerial role, Taoiseach Micheál Martin described the events as “damaging to the government”. Martin said that President Michael D. Higgins had, on the Taoiseach’s advice, terminated Cowen’s appointment.