What’s the beef? Farm organisations have their say

The Oireachtas Joint Committee on Agriculture, Food and the Marine heard from a range of beef industry stakeholders this afternoon to consider the current crisis in bull beef production.

Here’s a snapshot of their submissions:

“There is real anger and frustration among farmers over what has happened in the beef sector since the beginning of the year,” the IFA president outlined.

“Beef price cuts and specifications changes at factory level are seriously eroding confidence in the sector and threatening to derail the Government’s Food Harvest 2020 plan for the €2bn beef and livestock sector.” 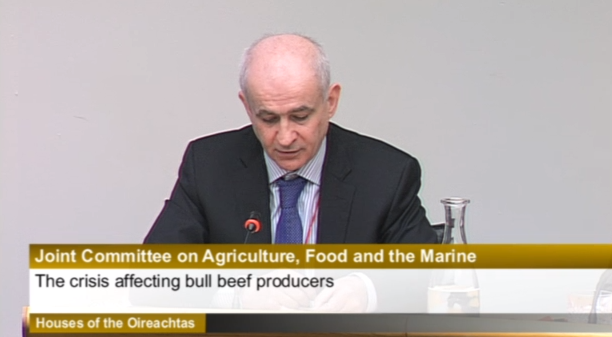 “When the cattle are killed, farmers they are facing price cuts of 50c/kg plus, which can be between €200 to €300 per head. Some of these producers are facing very real and very substantial financial losses this spring.”

The IFA president outlined how the market has changed dramatically over the past year.

“To put the magnitude of these price cuts in perspective, if these cuts were to be maintained for a full year, the losses to the Irish beef sector would be in the order of €172m pa.”

According to the IFA, in addition to the price cuts, the factories have moved very substantially on specification changes without giving producers adequate notice or time to make adjustments to their stock.

“On bulls, the factories have introduced age and weight limits. Bulls over 16 months of age and/or over 400kg are now hit with price penalties,” he claimed.

“It was the factories that developed this trade with producers. Indeed in 2011, factories strongly encouraged farmers not to export their dairy calves and to keep them for bull beef. Farmers responded and now these same farmers cannot get their bulls killed, let alone get a viable price.”

The IFA president said farmers have been let down and feel the factories have reneged on their commitments. 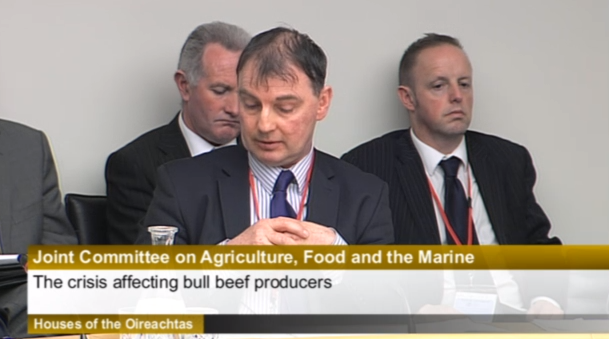 “The problem itself is quite clear,” said the ICMSA president in his submission. “On a direct comparison to this week last year and according to Bord Bia, bull beef prices in Ireland are approximately 17.4 per cent lower, which is equivalent to about €250 per head. Cow prices are down 16.3 per cent or equivalent to €200 per head, while steer and heifer prices are down over five per cent and six per cent respectively.

He continued: “In contrast, again according to Bord Bia, beef prices in Northern Ireland and UK (steers and heifers) are higher this week than in the corresponding week last year, while bull beef prices in France, Italy and Spain are broadly similar to this time last year. Those are the demonstrable facts and the question that needs to be answered is why the situation is different here in Ireland?”

The ICMSA is now calling for answers. “We need an answer because very serious losses are being incurred by individual farmers and these losses can be witnessed in marts today with the prices being paid for cattle all the way down to calves.  What has gone wrong and why are prices falling at a time of year when prices are usually on an upward trajectory?”

The farming organisation is calling on the minister to ‘step-up’ and explain why Irish beef prices have fallen more than EU counterparts.

“Prices in other EU countries have not fallen to the same extent and, indeed, have in several cases increased. The minister must tackle the meat plants on this matter and he is perfectly entitled to given the support of the exchequer for the beef sector.”

“As the negative impacts of the beef price grid on cattle from the dairy herd became evident, farmers were advised, with much fanfare, to move to bull beef by Teagasc and meat processors, they did so and now the market has now collapsed. As is usual, only the farmer is suffering the consequences of this flawed advice.”

Comer continued: “Did Teagasc do a market assessment? Did they talk to Bord Bia?  Flawed advice was given and farmers are now paying the consequences for it.

“In the short to medium term, clear guidance is needed from these state agencies on the requirements for the marketplace and how Irish production systems can meet these requirements.”

In terms of live exports, the ICMSA president said it is important to say that Ireland’s live export facilities are now world class and higher than the EU specification.

“We have a live export trade to the EU, a limited trade to North Africa, and an important trade to Northern Ireland – that is now, incidentally, coming under threat. What we are specifically lacking is a trade to the UK. We recently met with the Farmers Union of Wales and were told that many of their members that have purchased Irish stock are now finding it extremely difficult to get these cattle killed and when they could get them killed it was at a reduced price.

He added: “ICMSA understands that from 1 April 2014, Northern Ireland intends to class cattle imported from this State as ‘out of spec’ cattle.  This is totally unacceptable, absolutely against the concept of a single market, and is yet another example of the growing concentration of slaughter capacity both north, south and in the UK.”

It says this is a key issue that the minister needs to address.

“Irish cattle must be treated equally in these markets if exported live. I believe if this blatant anomaly was addressed, the gap of almost €250 per head between the Irish and UK R3 steer would close rapidly.  If this issue is not tackled – particularly in Northern Ireland – we will be playing even further into the hands of meat plants.” 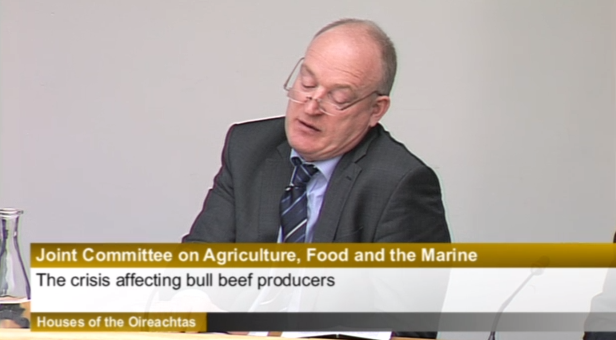 According to Kent, the current crisis is serious and is having a significant knock-on implications for the suckler sector.

“It’s disappointing enough to see that the steer price is back over 13 per cent compared to its peak last summer.  It’s a big problem for winter finishers to see price weakening over the costly winter months.  However, the real disaster relates to young bull beef price.”

Kent continued: “Young U3 bulls are on average back 21 per cent since last summer in price. However, average U grade bull price doesn’t even begin to tell the story of how the goalposts have been moved in terms of spec.  Nor does it tell the story of the immense pressure being put on winter finishers who are being treated with contempt and who can’t get cattle killed when they need to.”

Overnight, the bull over 16 months is apparently no longer wanted, he told the committee.

“Maximum carcase weight has been reduced in some cases to as low as 380kg.  Bulls a day over 24 months are worth considerably less than old cows.”

The impact on the suckler trade is potentially devastating, the ICSA president said.

“Suckler farmers producing top of the range continental bull weanlings cannot continue unless there are viable markets for this stock. Live exports are vital but on their own, they are not enough. How can we expect Irish finishers to have confidence to bid for the thousand euro weanling when specs are being changed at the drop of a hat?  How can a finisher take advantage of grass to grow the bull a bit at low cost, and then get these cattle killed at 16 months and at a maximum 380kg and make a profit? Especially as Irish U grade bull beef price in February is a full 25 per cent behind the equivalent Italian price?”

According to the ICSA Ireland president, it’s important to emphasise that it is the top-quality suckler producer that is most impacted by this.

He continued: “I anticipate the publication by Teagasc of the results from all profit monitors completed under BTAP will be a real wake-up call.  Already we know from our members’ anecdotes just how poor suckler returns are when they have completed the profit monitor.  It is now clear that the Food Harvest 2020 targets for beef are complete pie in the sky.”

DeLaval ramps up milking robot production due to ‘surge in demand’