‘Market manipulation’ must be addressed, ICOS 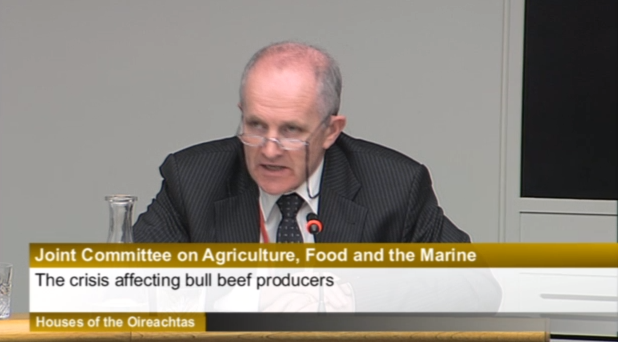 “Meat processors are manipulating the market. They have effectively usurped the Bord Bia quality assurance scheme and together with UK multiples, they are controlling prices for their own ends.”

This is according to the national marts chairman of Irish Co-Operative Society (ICOS), the national industry body for co-operative livestock marts and dairy co-operatives in Ireland, who was speaking at the Joint Oireachtas Joint Committee on Agriculture, Food and the Marine this afternoon.

“Ireland has more than 6.5 million cattle, producing 2.2 million calves annually. This results in almost 1.5 million cattle being presented for slaughter of which we export almost 90 per cent,” ICOS’s Michael Spellman explained.

“Additionally we have approximately 200,000 to 300,000 of live exports. Ireland has always been a provider of cattle for Northern Ireland and the UK for hundreds of years. As a nation we are only consuming approximately 10 per cent of what we produce and in 2013 Ireland produced over 472,000 tonnes of beef meat for export.

“The UK on the other hand is only approximately 75 per cent self-sufficient in beef meat and must import approximately 350,000 tonnes of additional beef to satisfy national demand. Ireland supplies the vast majority of this imported beef meat as you would expect due to our proximity.”

Spellman outlined the latest beef statistics. “In 2013 Ireland produced and exported more than 250,000 tonnes of beef meat to the UK representing almost 70 per cent of their total imports.

In terms of the quality bonus payment for cattle, the ICOS representative claimed this payment was in fact a penalty.

“Over the last number of years our meat processors have introduced what they call a quality bonus payment for cattle that fulfil certain ‘quality’ criteria,” he said.

“This bonus payment now stands at 12 cents/kg, which represents an average bonus of €40 to €60 per animal. In effect this is not a bonus payment but a penalty on all the other animals produced by Irish farmers.”

An integral part of qualifying for this bonus payment is the adherence to Bord Bia Quality Assurance Scheme (QAS), which has many criteria for full eligibility; regarding the trade and movement of animals the QAS states that animals must reside in a quality assured farm for 70 days or more to qualify, he claimed.

“Their scheme allows for animals to trade freely between quality assured farms and if the cumulative days an animal resides on such farms amounts to 70 days, then the animal still retains its quality assurance status.”

According to Spellman, the meat plants however have effectively usurped the Bord Bia Scheme and will only pay ‘their bonus’ if an animal; has resided 70 days or longer in the last herd; goes directly to slaughter from that farm to a meat plant; and have four movements or less in its lifetime.

“The rationale for the meat plants introducing these additional conditions is simple and clear. It is being done to subvert fair competition for livestock and ultimately control prices.”

He elaborated: “These bonus payments we are informed by the Meat industry are a customer requirement led by the large British multiples arising from animal welfare concerns. As outlined above, one of the main criteria to enable a farmer to achieve this bonus is having only four movements or less in the animal’s lifetime. Due to the structure of the Irish beef sector the smaller farms in the West traditionally supply other farmers in the Midlands and East of Ireland and Northern Ireland farmers with younger store animals.  To facilitate this, these animals require several movements on various farms before these cattle are finally finished on the last farm before slaughter.”

According to ICOS, it alleges this measure along with the other measures introduced by the meat industry is a form of market manipulation that ensures that transparent price competition is stifled as much as possible.

“The meat industry and UK multiples are fully aware that by manipulating the market in the manner described, farmers are not getting a fair and true market value for their stock,” said Spellman.

“The UK market is the only European market where these effective barriers to free trade in livestock exist. Ireland is exporting 200,000 tonnes of identical beef meat to Continental Europe without the restrictive stipulations that have been introduced for exports to the UK allegedly for quality and welfare reasons.”

ICOS contends that the further interference to the trade that is now evident with the effective ban by meat plants in Northern Ireland on killing cattle from the Republic in Northern meat plants is anti-competitive and in contravention of free trade principles within the EU.

“ICOS has a first-hand account of this from farmers in Northern Ireland.  We are aware of instances of Northern Ireland farmers with large numbers of Southern born cattle that are fit to slaughter who cannot get them killed in the Northern meat plants,” explained Spellman.

“One such farmer has told ICOS that he is facing financial ruin as he has more than 2,000 southern born cattle in his feedlot. For the past 30 years this farmer has purchased his cattle from marts all across the West of Ireland and always killed them in Northern meat plants.

“He now has been effectively told he cannot get these animals slaughtered in the Northern meat plants unless he takes a £150 sterling discount as they were born in the south of Ireland. This farmer now cannot export these animals back to the  southern meat plants as his herd has a movement restriction placed on his herd due to TB regulations (closed slaughter only herd). This policy, if retained, will leave this farmer and many others facing financial ruin. ”

According to ICOS typically, these Northern farmers purchased these cattle from the livestock marts in Balla, Ballymote, Mohill, Roscommon, Elphin, Castlerea Ballinasloe, Athenry, Ballyjamesduff, Ennis, Birr, Nenagh and Roscrea, representing a significant amount of trade for these marts but more importantly the local farmers in these areas.

“Apart from the obvious benefits of having an additional buyer around the ringside the ‘Northern buyer’ effect lifts the entire livestock trade the days these buyers are present as competition for stock heats up. This benefits everyone in the livestock industry and ensures a fair and open price.”

Spellman continued: “A founding principle of the EU was to ensure free trade between member states by the removal of barriers to trade.  The Ireland-UK beef trade is now seeing an effective re-introduction of national barriers to trade.  Inaction in this area by the EU and our national government is resulting in the large retailers and Irish owned meat factories exercising undue control over the price of beef.”

ICOS has raised these barriers to the free trade of live cattle on numerous occasions at national and EU level only to be informed that the EU requirement on the meat labelling regulation was to blame, he said.

“This assertion is not accurate as the retailers can easily label beef meat to comply with these regulations when it suits them. ICOS has been informed that the retailers themselves have conducted market research into the purchasing habits of consumers in the UK and no adverse purchasing habits were demonstrated when the label clearly illustrated the country of birth, finishing and slaughter of animals.”

According to Spellman, the BSE crisis during the mid 1990s was the impetus for the introduction of  regulation 1760/2000, which laid down that compulsory beef labelling be in place before the 1st of January 2002.

“There is now an urgent need on the part of the Government and the EU to review all of the terms and conditions of trade relating to both beef exports and live exports of livestock to the UK with a view to ensuring greater transparency and freer competition,” he stressed.

“Irish farmers are entitled to get the full value of their stock and not be exploited by questionable market restrictions introduced by meat factories with the support of the large retailers.”