What to do with male dairy-type calves 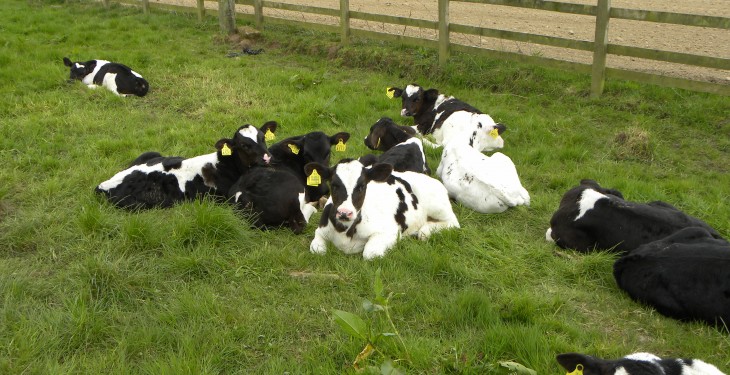 According to Teagasc the number of male dairy-type calves is due to increase significantly, as the dairy herd expands.

But, what to do with such calves has yet to be fully addressed. Previously, the blueprint for springborn male dairy calves was a 24-month steer production system, according to Teagasc.

In this system, it says, animals are finished during the second winter and the target carcass weight is 320kg. This target is achievable and repeatable, Teagasc says.

Its research shows that the feed budget for animals in this system is 52% grazed grass, 26% grass silage and 22% concentrates. However, it also says that the profitability of any dairy-calf-to-beef system is sensitive to selling price, calf purchase price and finishing concentrate price.

Finishing spring-born male dairy steers at 20-21 months of age, off pasture in autumn, eliminates finishing during the second winter, according to Teagasc, and in this system animals are supplemented with 5kg of concentrate dry matter for 60 days pre slaughter.

Recent results from Johnstown Castle have yielded carcass weights of 275kg. Conformation scores were P+/O- with fat scores of 2+/3-. In this system, grazed grass represents a large proportion of the animals’ diet (63%) with lower inputs of grass silage (19%) and concentrates (18%) compared to the 24-month system.

However, this system is heavily dependent on high levels of grassland management, Teagasc says and suboptimum herbage quality will reduce animal performance and increase the likelihood of having to incur winter finishing. This system has the potential of carrying a high stocking rate as animals are slaughtered at a younger age.

Alternatively, steers can be carried through the second winter on a low-input diet (grass silage only) and slaughtered during their third season at pasture (28-month production system). Lifetime concentrate input is low (350kg/head) and animals are slaughtered in May/June when beef price has been historically high.

Similar to the 21-month production system, a large proportion of their diet is from grazed grass (65%) with low levels of silage (28%) and concentrate inputs (7%). The target carcass weight in this system is 350kg.

The stocking rate of this system is lower than the 21-month and 24-month systems but a high carcass output is achieved.

The options for finishing male dairy calves have been studied and compiled by Robert Prendiville, Brian Murphy and Brendan Swan, Teagasc, Grange and Johnstown Castle.