Factory agents are very active in the cattle market at the moment, according to the IFA.

In its latest cattle price update the IFA says factories are paying 5-10c/kg above quotes on the back of tight supplies.

The latest cattle supplies at export meat plants for the week ending April 11 stood at around 29,000 head which was 3,400 or 11% behind supplies for the same week last year. 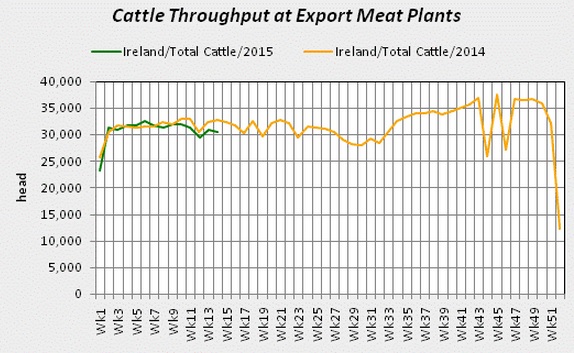 In Britain, Bord Bia says reported cattle prices from the AHDB have firmed with GB R4L grade steers averaging at Stg 356.1p/kg (equivalent to 491.56 c/kg) for the week ended April 4.

It says the market remains relatively stable with demand best for topside cuts.

In France, Bord Bia says little change has been reported with promotions this week centred on shanks, rumps, sirloins and diced beef. In Italy, the market has seen some slow down following the increases in trade prior to Easter.