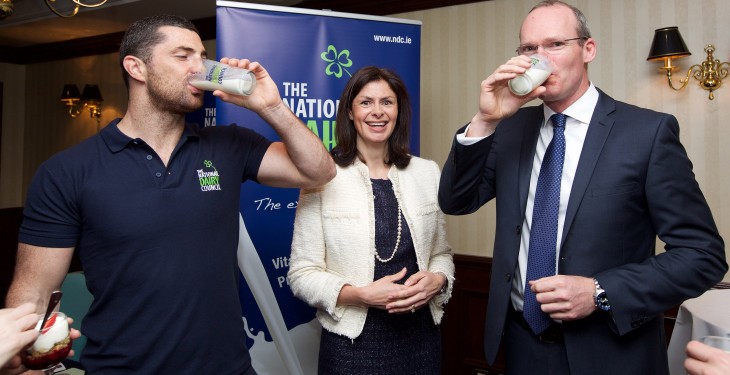 Next week is National Dairy Week 2015, which puts the spotlight on the top quality of Irish pasture-based dairy farming and produce – from farm to fridge.

This is the third successive year of the National Dairy Week campaign. Present at the launch were NDC ambassadors, former sprinter Derval O’Rourke and Irish rugby players Dave and Rob Kearney.

Speaking at the launch of National Dairy Week, NDC Chief Executive Zoe Kavanagh said that Ireland’s 18,000 dairy farmers are no longer little farmers who produce milk, they are actually a group of SMEs (small medium-sized enterprises) sprinkled throughout Ireland adding a huge economic contribution in rural environments where other industrys don’t reach.

“For every euro created at rural level, 85c of that is spent back into the economy,” she said.

Zoe also said that the Irish dairy sector, released from the shackles and restrictions of milk quotas, can now tap into its innovation and creativity in order to look at opportunities to expand within premium markets in a sustainable way.

“The role of protein in muscle growth and maintenance is recognised for everyone, but we are learning more and more about about the role dairy proteins can play in relation to sports nutrition as we age,” she said.

Minister for Agriculture Simon Coveney was also speaking at the launch where he said that the Irish Dairy Industry from a production point of view has essentially been operating within a straitjacket since 1984.

He said that Ireland is now a global player with a global footprint and the Irish Dairy Industry exports nearly 90% of what it produces. The Minister also said that Ireland will be the fastest growing dairy producer in the world in the next 10 years.

There will be a number of events taking place next week to mark National Dairy Week, including a sports nutrition seminar for dieticians, a Macra na Feirme ‘Dairyfest’ at UCD and a Teagasc farm walk on the Dwan’s farm in Tipperary.