Following Storm Ellen, the weather will continue to be changeable and unsettled, with scattered showers and windy conditions over the course of the weekend.

Today (Friday, August 21) sees blustery winds and widespread rain showers which will become more scattered during the afternoon. However, there are expected to be some bright spells developing.

Winds are expected to ease later in the day, with highest temperatures across the country between 16° and 20°.

Overnight temperatures will be no lower than 11° to 14°, with blustery winds and scattered showers remaining, mainly in coastal counties.

Tomorrow (Saturday, August 22) will be quite cool and windy, with patchy rain mainly in Ulster and Connacht. There will be occasional sunny spells with scattered showers, with temperatures between 15° to 19°.

Saturday night will be mostly dry with isolated showers of rain, mostly along Atlantic coasts and in the north-west. Temperatures will be between 12° and 14°.

On Sunday (August 23), there will be a mix of sunshine and scattered showers, with longer spells of rain in the north-west. There will be dry spells in the east, with maximum daytime temperatures of 15° to 19° across the country.

There will be persistent rain extending from the Atlantic late in the evening and overnight. Temperatures will be between 10° and 13°.

On Monday (August 24), rain will clear away eastwards in the morning and the day will brighten up gradually from the south-west. Sunny spells will develop through the afternoon, with some scattered showers that are expected to clear early in the evening.

On Tuesday (August 25), the south of the country can expect to see persistent and locally heavy rain through the morning and afternoon. It will be drier and brighter in the north. Heavy rain will extend from the Atlantic to affect the south-west later in the evening.

The unsettled weather forecast for the coming days will limit both drying conditions and opportunities for spraying across much of the country.

Soil moisture deficits are generally between 0mm to 20mm across the country. The above average precipitation, which is expected in the coming week, will continue to reduce deficits and some poor field conditions are possible across the country for poorly and moderately drained soils.

The ESB confirmed this afternoon that it has restored power to a further 14,000 farms, homes and businesses today following the damage caused by Storm Ellen on Wednesday night (August 19).

168,000 homes, farms and businesses have had power restored post Storm Ellen. There are still 26,000 farms and properties still without power. 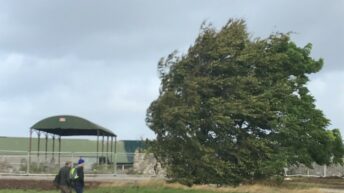