Warm but showery conditions forecasted, with lightning warning for today 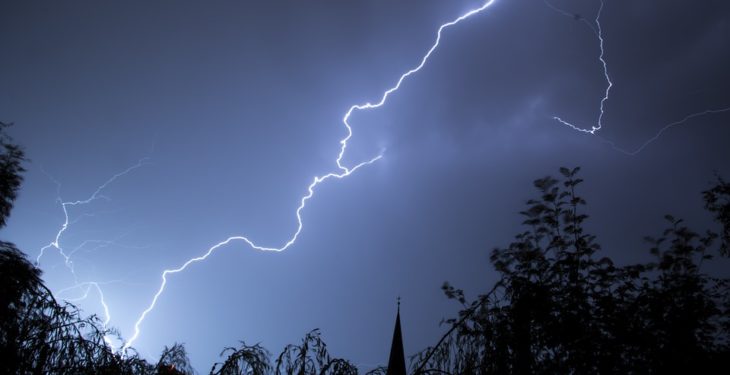 Met Éireann has issued a thunderstorm and lightning advisory notice for today, Monday, June 15, for the whole country, especially for parts of the midlands, west and north.

The notice came into effect this morning at 6:00am, and will remain valid until tonight at 11:00pm.

Generally, the coming week is set to be warm, but with rain and showers affecting most areas over the week.

Today will start dry and sunny. Showers will develop by lunchtime and will be heavy with the chance of thunder, bringing a chance of local flooding. Showers will be most frequent over the midlands and north.

Highest temperatures today will be between 20° and 23° in the midlands and north, and closer to 18° around the coast.

Tonight will be mainly dry for much of the country, with showers becoming isolated and less intense. Towards morning showers will move on to the southeast coast and will be heavy with a chance of thunder. Lowest temperatures will be 9° to 11°, with light northerly winds developing.

Tomorrow, Tuesday, June 16, will be mainly dry in the morning for much of the country. There will be isolated showers, becoming more frequent and widespread in the afternoon, and most frequent and heaviest in Leinster.

Highest temperatures tomorrow will be 15° to 17° generally – though up to 20° in the southeast – in light northerly winds.

Tuesday night is set to be mainly dry for much of the country, as showers will become isolated across the south – though they will still be heavy in nature. Lowest temperatures will be 10° to 13° with light to moderate northerly winds.

On Wednesday, June 17, the showers will be most frequent in the south and southeast. Elsewhere there will be drier weather with sunny spells.

On Thursday, June 18, showers will be most frequent in Munster and south Leinster, with light northerly winds becoming variable in direction. Temperatures in the afternoon will be 19° or 20°, and down to 9° to 12° during the night.

There will be showers in Ulster on Friday, June 19, but elsewhere will be mainly dry, as winds become light to moderate westerly and sunshine spreads from the west.

Current indications suggest a spell of warm settled weather will return later next weekend, as pressure builds over Ireland again.

Drying conditions over the coming week will be poor at times in precipitation but there will be some drier interludes in between spells of rain or showers, while opportunities for spraying will be limited in the unstable weather conditions expected in the week ahead.

Soil moisture deficits remain high in all parts of the country and for all soil types, but some improvement is expected in the week ahead.