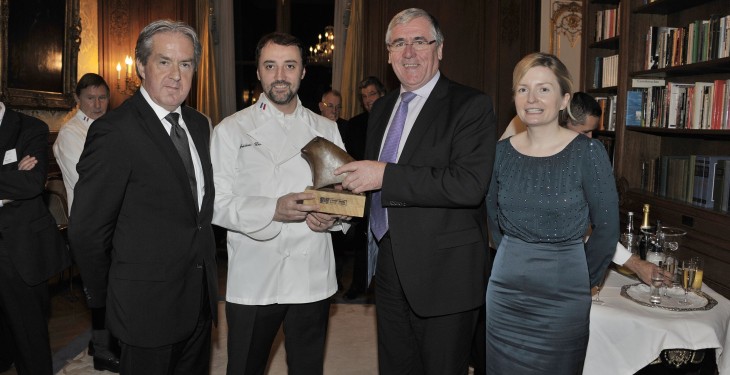 Minister of State at the Department of Agriculture, Tom Hayes, welcomed representatives from major French retailers and the food-service industry at the Bord Bia Irish food and drink trade reception in the Irish Embassy in Paris this morning.

Representatives from more than 25 agri-food exporters to France from the meat, dairy, seafood, beverage and prepared food sectors were also present.

Minister Hayes said he “wished to consolidate and strengthen the links between Irish food and drink exporters and their expanding French customer base”.

France remains the leading Continental European market for Irish food and drink exports and Ireland’s most important eurozone trading partner in the sector.

Minister Hayes commented: “The relationship between France and Ireland has grown from strength to strength over the past decade.”

He spoke of how “the passion, entrepreneurship and commitment shown by the Irish food and drinks industry in promoting the best of Irish food is evident here today”.

At the reception hosted by the Irish Ambassador in Paris, the minister went on to say that “the exceptional resilience and performance of Ireland’s food and drinks industry has been further enhanced since the inception of Origin Green – an initiative by Bord Bia focusing on sustainability, traceability and transparency in the supply chain”.

The minister added: “There is a global shift to produce food in a more sustainable manner and Ireland have made this a key priority to be a world leader in the marketplace with sustainably produced high-quality food.”

In welcoming two new chefs into the prestigious ‘Chef’s Irish Beef Club’, the minister acknowledged the excellent work done by all the chefs in this club in promoting Irish beef.

Pictured: Aidan Cotter, CEO of Bord Bia; Chef Frederic Ducas being welcomed into the Chefs Irish Beef Club by Minister of State at the Department of Agriculture, Food and the Marine; and Noreen Lanigan from the Bord Bia Paris office in Paris