Almost 1,800 exhibitors from over 40 countries will show their wares. 240,000 visitors from 142 countries are expected to travel to the event.

The show is chiefly an indoor agricultural machinery exhibition, though there are conferences and other attractions dotted about the sprawling site.

For anyone visting the show, there is a free shuttle service between Paris Charles de Gaulle airport and the venue. Reception desks in Terminal 1 and 2 at the airport will guide show-goers to the free shuttles.

Key machinery attractions at the event will include Case IH’s autonomous tractor – a driverless Magnum – and New Holland’s remote-operating tractor – the NHDrive. 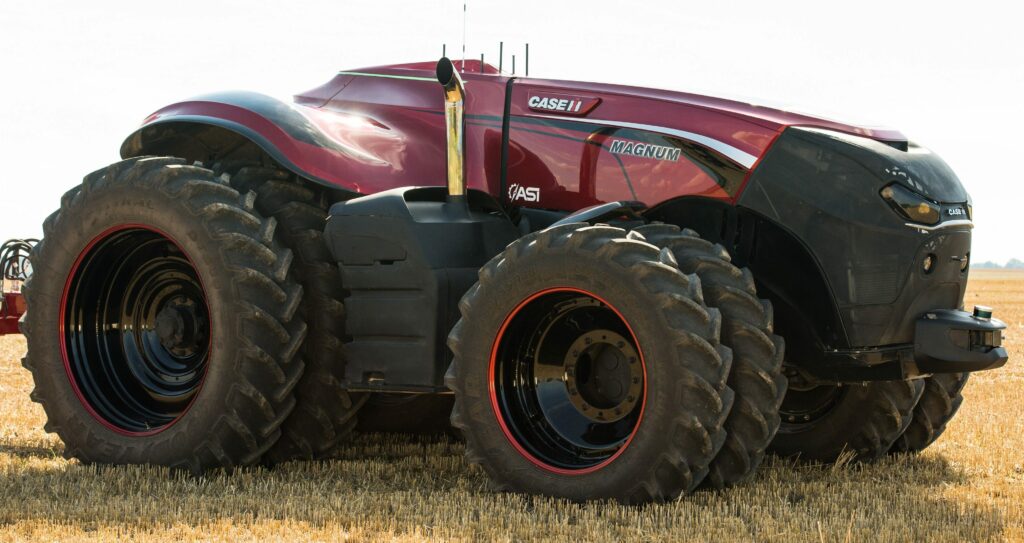 The New Holland version looks like a conventional tractor, in so far as it still has a cab, but it can drive autonomously when required.

But what use is a tractor, or a trailed implement, without a tyre (unless it’s a tracked vehicle, of course)? To that end, Michelin will show its latest EvoBib. This ‘two-in-one’ tyre has a central tread system for road transport.

At recommended pressures on the road, only the central portion of the tread pattern is in contact with the ground. This portion has a low rolling resistance to mimic a radial tyre, reducing vibration at higher speeds.

Pressure can be reduced down to 0.6 bar in the field. At these reduced pressures, the outside tread lugs can expand to boost grip and traction. According to Michelin, when the studs expand the contact area is increased to a greater extent than is the case with a traditional radial design.

Also on the theme of tyres at SIMA, Trelleborg has partnered with Fendt to officially launch its on-board tyre inflation system. It automatically adjusts the pressure, depending on the load. It can be retrofitted to existing rims.

Stay on the level with Massey Ferguson

Massey Ferguson will showcase its Dynamic Top-Link Control (DTLC) system. It automatically adjusts the length of the top link, to keep the attached implement in a constant position (relative to the ground).

It is suitable for use with cultivators and a range of equipment, though Massey Ferguson says that the benefits will be most immediate on a fertiliser spreader. In that application, the system can compensate for changes that will affect the angle of the spreader as it sits on the tractor; i.e. the weight on the tractor’s back axle or ground undulations.

To see highlights from the last SIMA show, which took place two years ago, watch the video below…

Animal transport rules ‘must be decided by science – not sentiment’