Video: Ever wondered what a 320ac cranberry harvest looks like? 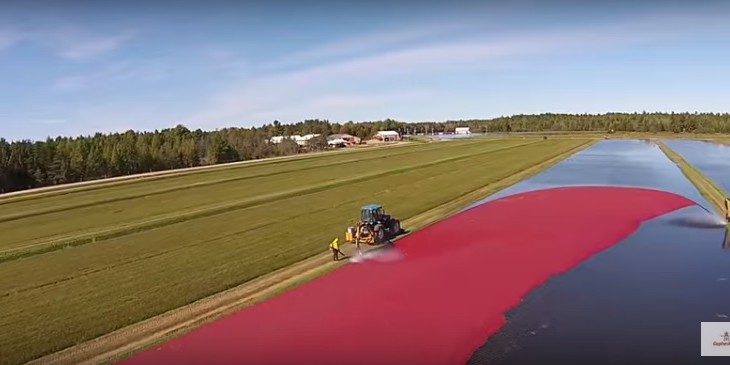 Have you ever wondered what a cranberry harvest looks like? Gopher Aerial filmed the harvest recently at Lake Nokomis Cranberries in the US.

The manager of the operation, Mike, said that the number one misconception is that they grow in water.

“Cranberries grow on dry ground but water is used for harvesting. Cranberries float, so they are raked off of the plants into water.

“The water is then flooded deeper so tractors can drag a corral boom through the cranberry bed to get them to one end of the bed in which they grow.

“Once corralled a machine called a berry pump is brought in and the berries are pumped into waiting wagons.

“The wagons carry the crop into a cleaning station where they are cleaned and put into waiting semi trailers to be brought to the processors.

“The water is drained from the bed and another season can begin,” he said.

Dave Zawistowski the owner of the farm then bought another marsh in Stone Lake, Wisconsin, called Golden Pond. It has 60 producing acres and has future plans of expanding, according to the farms website.

The video shows the tractor going through the bog raking off the cranberries into the water.

It then shows the berries being pumped into waiting wagons.