Video: ‘Elevating’ the 2017 silage season to a whole new level 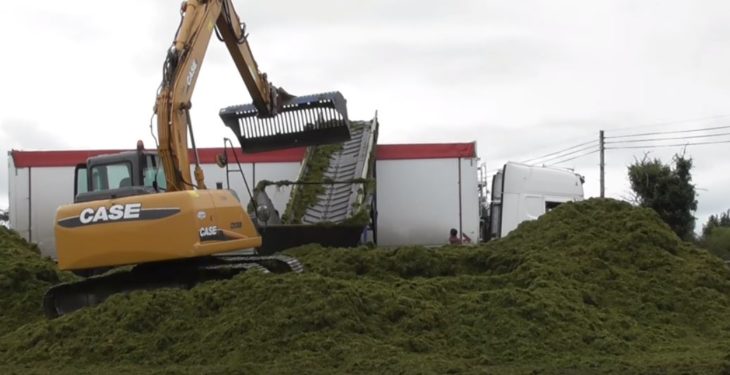 In the face of adverse weather conditions, a farmer, an agricultural contractor and a local haulier teamed up to finish off the 2017 silage season in memorable fashion.

With a draw of approximately 35km separating the pit from the field in east Co. Galway, the same local haulier has worked alongside the contractor and farmer in the past – to get the job done.

But in the wake of a recent spell of bad weather, there was no hope that these artic trucks would be able to travel in the field alongside the Claas Jaguar 860 forage harvester – even with assistance from a tractor.

Instead of accepting defeat, a solution was found. Kennedy Bros, an agricultural contracting business on the border of counties Galway and Roscommon, was employed to tackle the job.

In a field approximately 60ac in size, a Krone Big M MkII alongside a Claas tractor with a front-mounted Taarup mower (10ft) and a rear-mounted Claas mower (11ft) were used to knock the grass in mid-September.

Another Claas tractor, hooked up to a 30ft Lely rake, was then put to work – before a Claas Jaguar 860 forage harvester arrived on the scene with a fleet of tractors and trailers.

These tractors then set about tipping the grass in the corner of the field, where a 13t Case CX130C tracked excavator – equipped with a wide grading bucket – set about loading the waiting artic trucks.

These lorries then made their way along the main roads of east Co. Galway, dropping their loads at the base of the pit in the farmyard some 35km away – courtesy of ‘walking-floor’ trailers.

This is the second cut of silage from this particular field in 2017. Earlier this year, the same army of machines – minus the digger and elevator – tackled this mammoth job.

Footage of this incredulous undertaking was captured by Conor Ryan, who operates under the name Galway Agri Videos on social media. 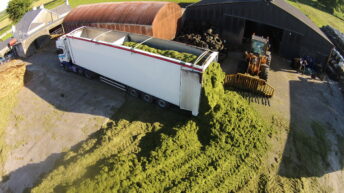