Video: Do you have enough work for a self-propelled drill?

As farmers and contractors look ahead to spring sowing, Agriland takes a look at some of the more unusual contraptions for crop establishment. In particular, we focus in on the various attempts to create a self-propelled drill – some more successful than others.

14 years ago, Lemken built a prototype self-propelled power harow drill combination – dubbed the Brillant. It attracted plenty of attention at that year’s Agritechnica show in Germany but, ultimately, never made it into series production. 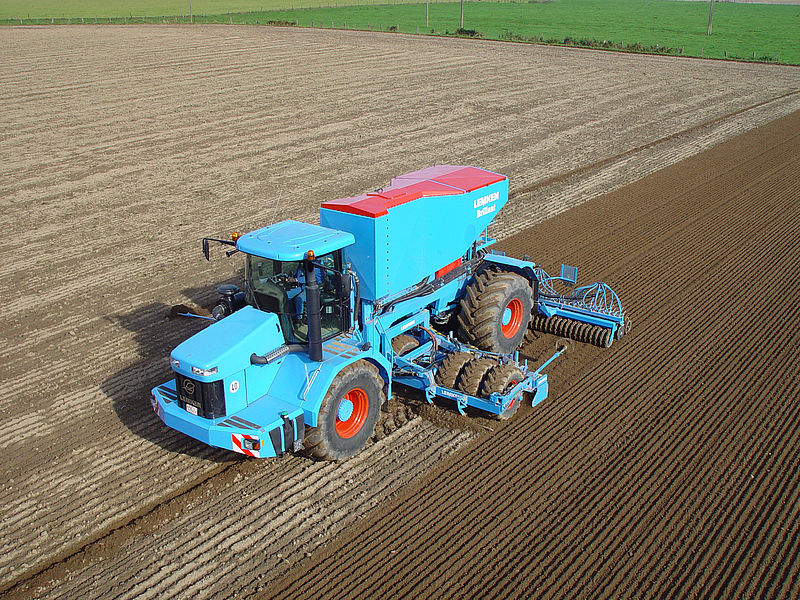 It comprised Lemken’s own cultivation and drilling equipment, grafted onto a Terra-Gator drive unit. Terra-Gator is best known for its range of self-propelled muck spreaders and slurry tankers, albeit very large machines. Nevertheless, a small handful of Terra-Gators have been purchased by Irish contractors over the years.

The Brillant did incorporate some noteworthy features. For example, the rear axle could be raised (in the field) to put more weight on the front axle. The machine weighed up to 22t.

Key to the machine was its furrow press roller and ‘trapezoidal’ disk harrow. A power harrow followed behind the ‘driven’ tyre-mounted furrow press roller. Boasting a working width of 6m, the Brillant’s hopper could hold 7,100L of seed. Lemken did acknowledge that a wider working width would have been desirable, but squeezing the machine into an allowable transport width of 3m and a transport height of 4m proved to be a major constraint.

With 325hp under the hood, Lemken claimed the machine could work at speeds of up 14kph.

Lemken was not alone in its bid to create a viable self-propelled cultivator drill.

Fellow German company Horsch also toyed with the concept, basing its contraptions around its existing ‘systems tractors’ – such as the three-wheeled Terra-Trac.

Indeed, one could argue that the practice of building a ‘de-mount’ drill around the likes of a Claas Xerion also qualifies as a self-propelled drill – of sorts.

Dutch firm Vervaet’s Hydro-Trike tool carrier, best known as a platform for slurry tankers, has also been kitted out as a self-propelled power harrow drill combination.

Thanks to its three-wheel configuration (with two additional small stabiliser wheels), and tight-turning front wheel in particular, it is very manoeuvrable for a machine of its length and size.

Also based in Holland is this striking rig (below), again built around the trike concept. Zetor fans will immediately spot the Forterra 135 tractor, albeit heavily modified.

The main advantage of this approach is that the rig’s weight is spread across the entire working working, thanks to its build configuration. Because the seed hopper is mounted on the ‘trike’, rather than hanging off the rear 3-point linkage, this also helps to spread the weight more evenly across each of the wheels.

The obvious downside is that the heavily modified machine is quite specialised, unlike a conventional tractor. This means added cost and, ultimately, reduced flexibility for the rest of the year.

Have you ever seen a self-propelled 'small' square baler?