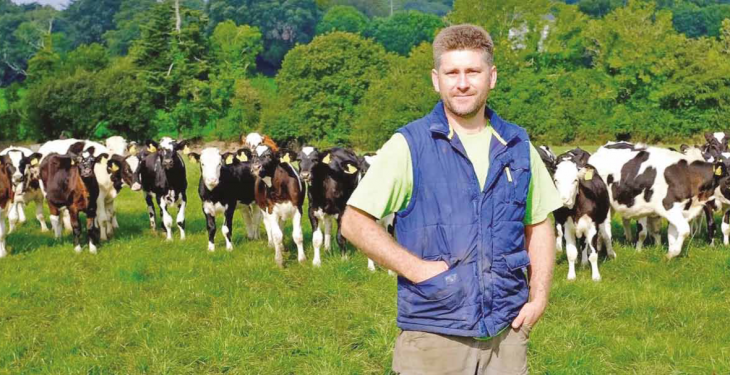 “Since we started vaccinating our calves, we have had no issues with pneumonia. It gives us real peace of mind and massively cuts the risks of a setback in performance.”

This is the verdict of Seoirse McGrath who runs an 180-cow dairy herd with his father Joe in Arklow, Co. Wicklow.

The McGrath farm straddles the Wicklow/Wexford border. The milking parlour and grazing platform is in Wicklow and they have an outfarm in Wexford.

They are liquid milk suppliers to Glanbia and with up to 90 heifer calves reared each year, pneumonia is always a risk. Vaccination against pneumonia before the calves come under stress is a critical part of the management programme.

“Calves are given two shots of Bovipast RSP. They get the first shot at three weeks of age, followed by a booster shot four weeks later,” said McGrath.

Bovipast RSP is the only vaccine that protects against pasteurella pneumonia (caused by the bacterium Mannheimia haemolytica) as well as the two main viruses, Bovine Respiratory Syncytial virus (BRS-virus) and Parainfluenza 3 virus (PI-3 virus).

Young calves are highly vulnerable to pasteurella and viral pneumonia. While they get protection against pasteurella pneumonia through antibodies in the cow’s colostrum, these antibodies are severely depleted after three weeks.

The key to controlling pneumonia is to have the vaccine working before the calf comes under stress. The middle of February will see peak calving in the McGrath herd. Feeding up to 90 calves over the coming months, on top of managing the 180-cow herd, will involve a heavy workload.

“The last thing we need is sick calves.

“Before we introduced Bovipast vaccination, we had a number of pneumonia outbreaks. The time involved in treating sick calves, not to mention the cost and the loss of thrive, was horrendous.

“Since we introduced vaccination, we have had no problems with pneumonia. While we get an occasional animal with symptoms, the response to treatment is much better and chronic cases rarely occur,” said McGrath.

Infectious Bovine Rhinotracheitis (IBR) is another disease that gets top priority. Calves are given an intranasal shot of Bovilis IBR Marker Live at three weeks of age on the same day as they get the first shot of Bovipast RSP.

Almost three-quarters of all suckler and dairy herds are known to be positive to the IBR virus. It is a highly infectious disease. Symptoms can often be vague and could be attributable to a number of diseases.

The typical signs include:

Animals are also more prone to other diseases as a result of being infected with IBR. Infected cows can show a sudden drop in milk yield in mid-lactation and fertility problems may also occur.

Infected cows can show a sudden drop in milk yield in mid-lactation and fertility problems may also occur.