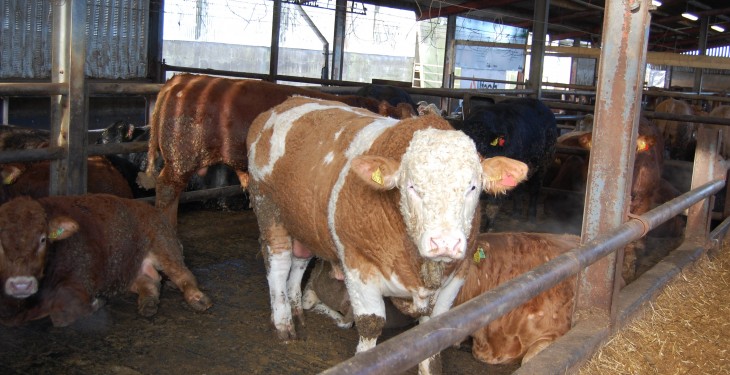 Finishing bulls on the Bourns farm

UK supermarkets are paying less for young bulls at the moment, according to Bord Bia Beef Sector Manager, Joe Burke.

“This includes animals that are younger than 16 months of age,” he said.

“They are being cut by the equivalent of 10p/kg at the present time.

“And it is for this reason that they are discounting beef produced from young bulls across the board.”

Burke spoke at the recent Beef Finishing Masterclass, hosted by the Bourns family from Ballinasloe in Co. Galway. The event was organised by Alltech, Zoetis and Easyfix.

Burke confirmed that the recent strengthening of the euro against Sterling is putting pressure on Irish beef prices.

“All the price gains made in 2015 took effect during the first eight months of the year. In fact, prices during January 2016 were lower than those recorded during the same period of 2015.”

Burke said that 80,000 additional cattle will be slaughtered by Irish meat plants this year.

“We are expecting to see a 0.4% year-on-year increase in beef consumption levels across the EU.

“This will help compensate for the increase in Irish output. But UK and European supermarkets have a problem with overweight cattle.

“Specifically, they have made it clear that loin steaks from carcases over 420kg are too large: they just can’t sell them.”

The Bord Bia representative agreed that new live export markets for Irish cattle must be found.

“Last year saw us lose two important outlets in this regard.

“Belgium has now banned the importation of cattle from regions that are not IBR-free. And, unfortunately, Ireland cannot meet this animal health requirement at the present time.

“In tandem with this, the political and economic situation in Libya ruled out that market entirely, from a live export point of view.

“Approximately 120,000 additional calves were born in Ireland during 2015. It is crucial that we find the best possible markets for these animals over the coming months.”