Beef from the UK has been cleared for export to China for the first time in over 20 years, following a number of inspections there by officials from the Asian country.

The agreement will allow UK beef to be exported to China for the first time since a ban was imposed in 1996 following the bovine spongiform encephalopathy (BSE) outbreak in the UK in the 1990s.

Among the agencies that were involved in this new agreement was the government authority for agriculture in Northern Ireland, the Department of Agriculture, Environment and Rural Affairs (DAERA).

Four beef processing plants across the UK have been cleared for exporting to China, with more currently under review. The first shipments are expected to be moved out in the coming months.

Theresa Villiers, the UK’s secretary of state for environment, food and rural affairs, said: “Sealing this landmark agreement with China is huge news for our world-renowned food and farming industry, meaning more people across the globe can enjoy British beef.

“Today’s milestone marks another step towards unlocking the industry’s full potential, and reflects our ambition to maximise trading opportunities for British produce across the world as the UK leaves the EU,” Villiers added.

The ban was officially lifted in June of last year, at which point the process began for approving beef plants for export.

The new deal is expected to be worth some £230 million (€267 million at the current exchange rate) to the UK’s beef industry.

China also recently approved five UK pork plants for export. The UK government expects more pork plants to be approved before the end of the year.

At present, China is the UK’s eighth largest export market for food and drink. Over £610 million (€709 million) of UK produce was bought by Chinese customers last year. 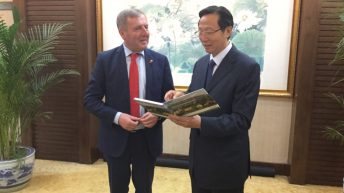