??….this happened on one of the side roads in Allihies, there’s an old mine shaft close by it, no doubt the cause. pic.twitter.com/pbX2hFmu4h 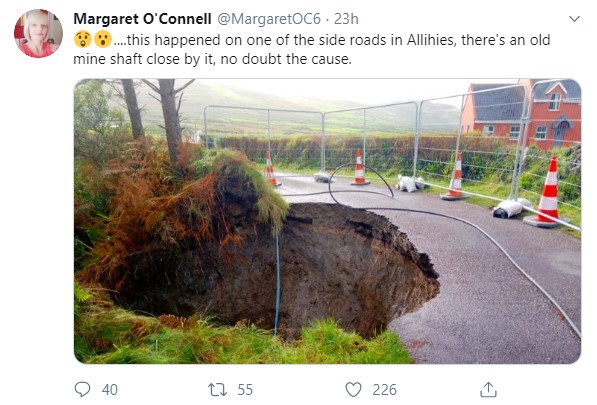 “This is what’s after happening; it’s an old mine shaft that would have been under the road and that’s why there was a collapse and caused a big sinkhole. It’s a busy enough little road; it’s a typical rural byroad.

There would be a good few people using it – but the big thing here is it’s extremely dangerous.

“It’s quite a substantial hole; it’s quite deep. No one really knows how deep it is.

“It became more noticeable there in the past week when we had all this torrential rain; when it really opened up and collapsed. A number of them have collapsed in the past but nothing like this, so close to the road.”

Harrington said he doesn’t believe there’s any way of preventing a repeat of such an incident, adding that, when the mining company in the area was operating, a lot of speculating was done to test for copper.

“There’s lots of these old mines and drillings done there so nobody knows really the extent of them and where they’re going to show up,” he said.

Machines set to motor through the midlands next weekend