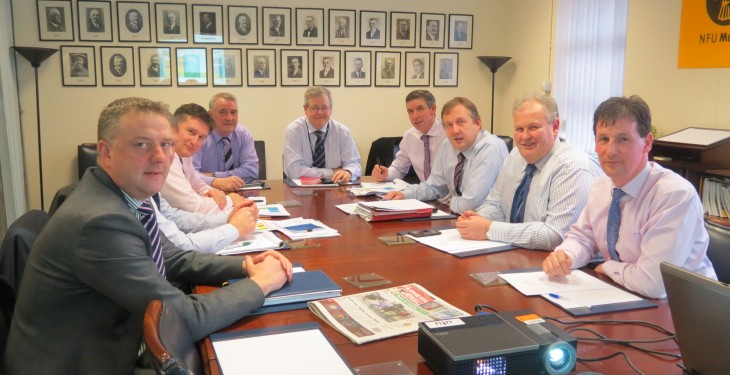 Following a positive meeting yesterday with members of the Agri-Food Strategy Board (AFSB), Ulster Farmers’ Union (UFU) President Harry Sinclair has said it is clear that the UFU and AFSB are broadly aligned in their views as to how best to implement the new Common Agricultural Policy (CAP) in Northern Ireland and direct support towards productive agriculture.

Sinclair continued; “It is undeniable that the CAP plays a very important role in Northern Ireland’s agri-food industry. In 2013 the CAP accounted for 87 per cent of farmers’ total income, and with the marketplace not delivering proper returns to producers it is all the more important that CAP support is targeted at productive agriculture.

“Moving to a flatter rate payment too quickly and to a single region has the potential to incur irreversible consequences which will undermine NI’s current productive capacity let alone any future growth and development of our agri-food industry.

“The Agri-Food Strategy Board is leading the way with well developed plans to grow our agri-food industry by 60 per cent to £6bn sterling by 2020. We and the AFSB recognise that the industry cannot achieve this growth without support. The CAP must be targeted at productive agriculture and we must see a meaningful commitment from the Northern Ireland Executive going forward. It is extremely frustrating to watch the agri-food industries in the Republic of Ireland and Scotland blazing ahead and smashing their targets for growth. Northern Ireland’s agri-food industry has a tremendous amount of potential but there is a very real danger that we will be left behind.”

The UFU will be meeting the NI Assembly’s Agriculture Committee on Monday 17 February to discuss our position on CAP Direct Support implementation and has also requested a meeting with the Northern Ireland Agriculture Minister for which a date has yet to be agreed.