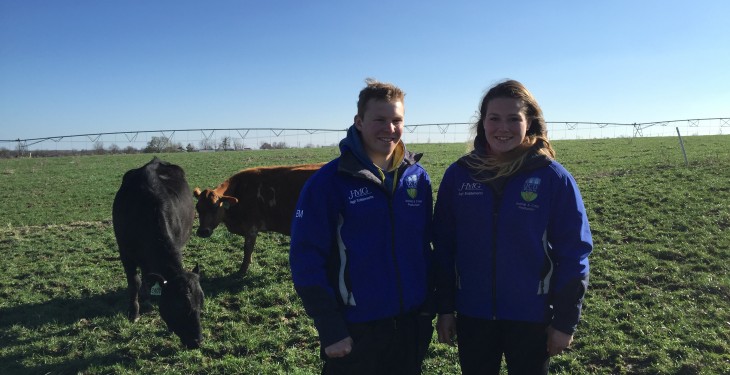 Calving 600 cows as the temperatures drop to -16  (and 5 inches of snow falls) was part of the professional work experience that two UCD students experienced as part of the curriculum of their Agricultural Science course.

Gary and Niall Murphy share milk 1,800 cows across two locations owned by Grasslands in Missouri. We arrived in January knowing little what was ahead of us and expected the cows to be housed through the winter similar to home. At that stage only five cows had calved out of the 641 due from February 1 onwards on the farm.

The other 1,200 cows are on another farm 30 minutes away. It is a Jersey crossbred pasture based herd where the stock graze outdoors all year round. The farm is 510 acres (206.5 hectares) in size and found in south west Missouri. Emerald Dairies is share-milking 538ha in total.

In the first two weeks, the weather was similar to an Irish summer with temperatures ranging from 12°C to 18°C, however three weeks into the experience the students realised there had been no exaggerations in the changeable weather. The temperatures dropped to -16 degrees with five inches of snow and wind chills reaching -25 degrees.

There was over 600 dairy cows to calve and there was no slatted sheds or calving pens. As the cows were unable to graze due to the thick snow cover they were fed above maintenance levels of silage according to the number of cows per group and each cows daily dry matter requirement.

This varied each week for the milkers and was kept at a constant 10kg DM/head/day for the cows due to calve. We found out that cows produce heat when they’re digesting because they are ruminants so, by keeping them well fed and constantly digesting they will stay warm.

The cows were bedded in the paddocks with round bales of hay or straw so as they could lie down and eat while staying warm, it also helped to avoid the cows getting frostbitten teats. The cows were fenced into smaller areas of the paddocks keeping them in close proximity and helping them retain each other’s body heart.

In the icy conditions cows were checked more often, usually every two hours during the day and every two to three hours during the night. This was in order to avoid losing any calves from the freezing temperatures. Very few calves were lost due to the cold (2.9%).

Newborn calves are picked up as soon as possible after calving and brought into an insulated truck container which is bedded with straw and is kept at a cosy temperature of 20°C. They are then stomach tubed with 2.5L of golden colostrum and tagged.

Every day the calving herd was brought into the milking parlour where the freshly calved cows were drafted out, while doing this we also iodine their teats.

The freshly calved cows join a separate herd from that of the milking one. This herd contains approximately 15-25 cows whose milk is unsuitable for sale due to antibiotics, colostrum, or mastitis present in the milk.

All colostrum is collected from the freshly calved cows and is quality tested to ensure calves receive an adequate amount of antibodies for a healthy immune system. This is carried out using a colostrometer or refractometer.

Sophie Tyner and Enda Maloney, went to Gary Nolan, owner of Emerald Dairies in Missouri, for their work experience.