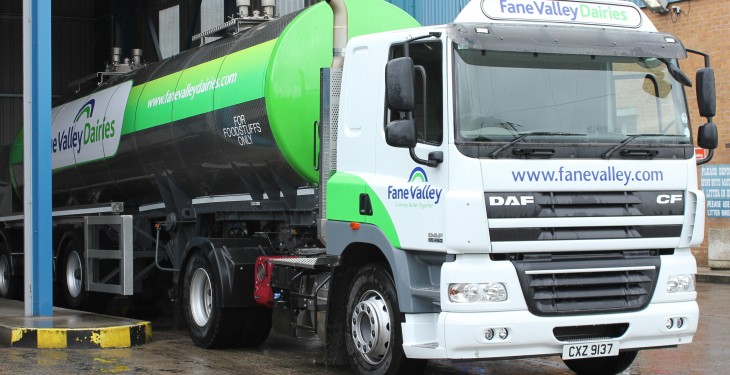 Turnover for the same period totalled £553m, up 4.0% on the previous 12 months. The co-op has extensive dairy processing, redmeat and feed compounding interests.

Fane Valley Chief Executive Trevor Lockhart described the results as ‘very acceptable’ as the business had to cope with a number of market downturn, chief among the being the outworkings of the ‘Horsegate’ scandal during the year in question.

“In Fane Valley Dairies the volumes of milk powder increased by 20% while the quantity of butter reduced by 20% reflecting the product mix and a strong emphasis on whole milk powder,” he said.

“As a result of the initial high selling prices in the year, turnover was at an all-time record level of £106m, a 15% increase. Fane Valley’s direct supply milk pool increased through the year to over 240m litres while work commenced on its three-year investment programme with a new effluent treatment facility due to be commissioned in spring 2015.

“The next phase of investment will focus on new evaporation and packaging technology aimed at further enhancing the quality and functionality of the products we produce.”

Sales within the Linden Food Group, in which Fane Valley has a majority shareholding, were largely unchanged at £336m. Mr Lockhart said that 2014 had been a particularly challenging year which resulted in reduced profitability within the red meat division.

“Positive performances in our branded and added value beef and lamb activities were overshadowed by the pressures in primary beef processing,” he said.

The demand for supermarket specification animals was intense in the aftermath of ‘Horsegate’ as processors sought to fulfil the requirements of the UK multiples, he said, and this initially pushed cattle prices to record highs.

At the same time significantly-reduced demand across Europe for manufacturing meat resulted in the build-up of substantial meat stocks. This eventually had a more depressive effect on cattle prices, he said.

“The lower cattle prices did not however compensate fully for the reduced market returns and the end result was a reduction in processor margins, something that was experienced across the trade.”