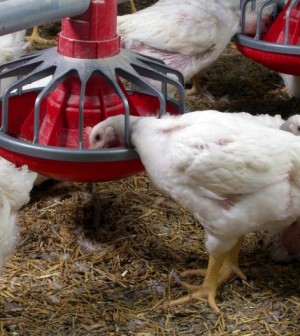 Chickens on seven poultry farms in the country have tested positive for Salmonella enteriditis, the Department of Agriculture has confirmed.

The Department is investigating the poultry farms to identify the source of the strain. Symptoms in poultry include dejection, ruffled feathers, diarrhoea and stunting in older birds.

The strain poses an occupational health risk to those who closely handle birds infected with the disease, however, the Department says that there are no food safety risks arising from the outbreak.

“The birds are subject to the prescribed controls, either destruction on-farm or to a process of controlled sanitary slaughter and subsequent cooking of the meat. In all seven cases, appropriate controls were and are being applied,” the Department says.

For birds that are infected by the strain that will be culled, there is no compensation payable to infected flocks and a poultry salmonella control programme in breeding flocks of hens has been in place in Ireland for more than 20 years, the Department confirmed.

The Food Safety Authority of Ireland (FSAI) and the HSE have been notified of the outbreak by the Department.

Recently the FSAI recommended not drinking raw milk as pathogens such as Salmonella and Campylobacter can be found in the raw milk, which can be serious in vulnerable groups such as the elderly, young children and invalids.