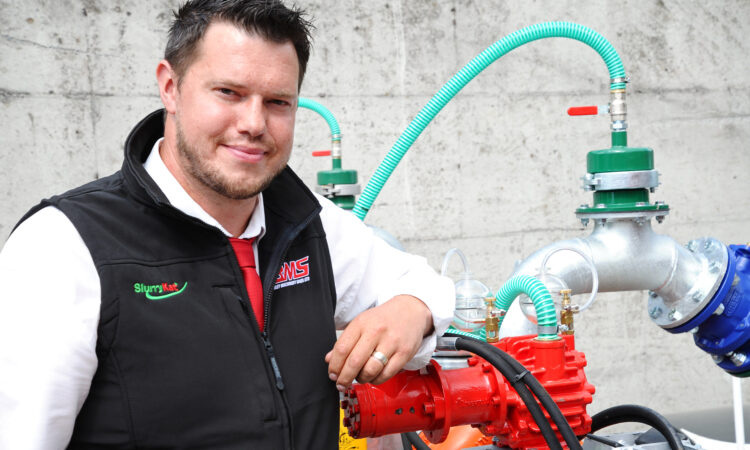 “There is no longer any such thing as a one-size-fits-all slurry tanker,” claims Darren Bailey of Bailey Machinery Sales (BMS).

“Every tanker is now bespoke.” This statement is borne out by the two SlurryKat machines in the yard that await delivery to their new owners. 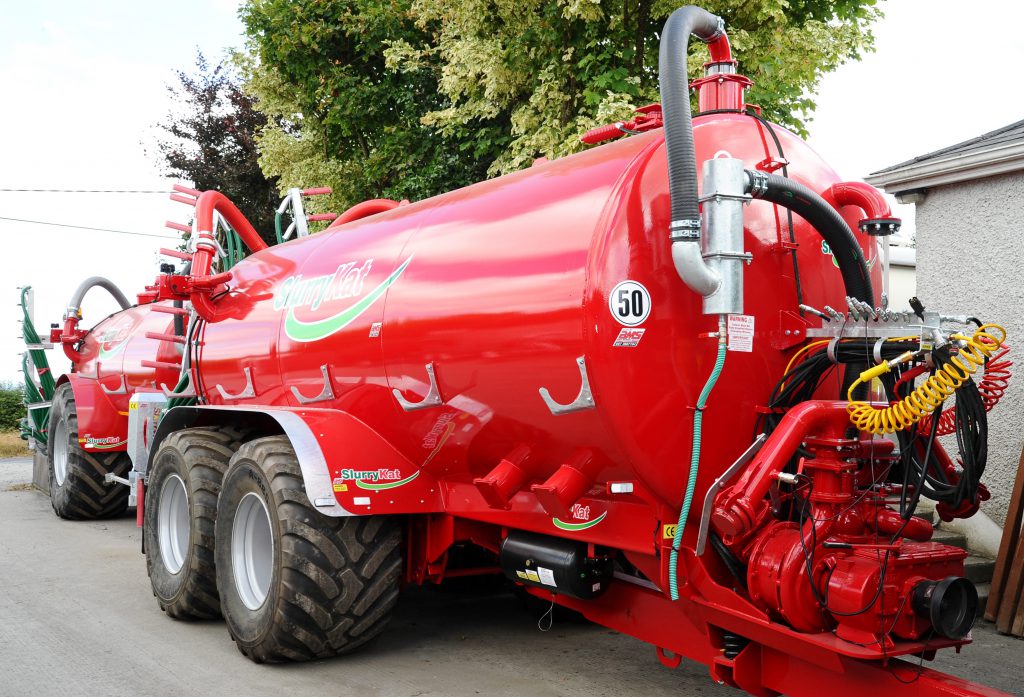 These are far more than just sealed tubes, with vacuum pumps and holes at the back to let everything out. They are now able to fill and dispense the material in all sorts of ways, including delivery to an umbilical system (or via a dribble-bar or the now-archaic splash-plate).

SlurryKat appointed BMS as an agent for the southern half of Ireland early in 2017; both seem pleased with how the arrangement is working out. 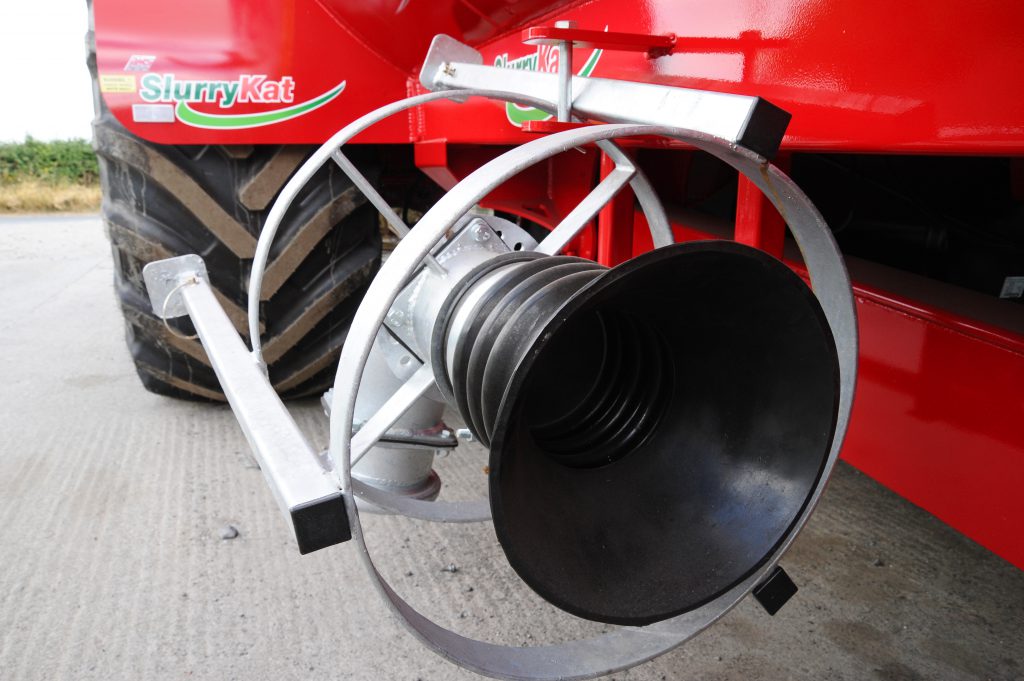 Darren comes from a farming and contracting background; he spent time working for a big-brand machinery dealer, as well as several years as a well-known agricultural machinery journalist.

Such experience encompassed operating, buying, selling and reviewing equipment. He now feels that he has a deep understanding of the needs of farmers, in addition to a good grasp of how modern machinery can mesh with their requirements. 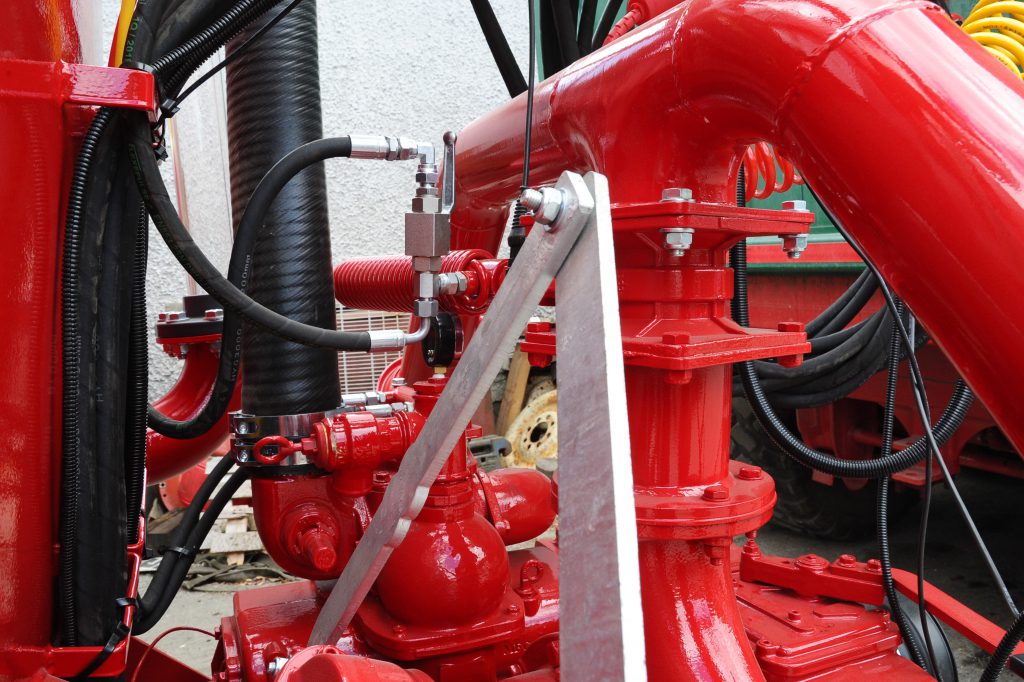 Meanwhile, SlurryKat has found itself an enthusiastic dealer who relishes the prospect of selling its wares into the farming sector. A sound knowledge of the trade, and of the machinery itself, will be essential as machinery complexity grows.

Three methods of spreading have already been mentioned; even within these there are variations. For instance, the dribble-bar is complemented by the trailing shoe – for ‘low emission’ applications. 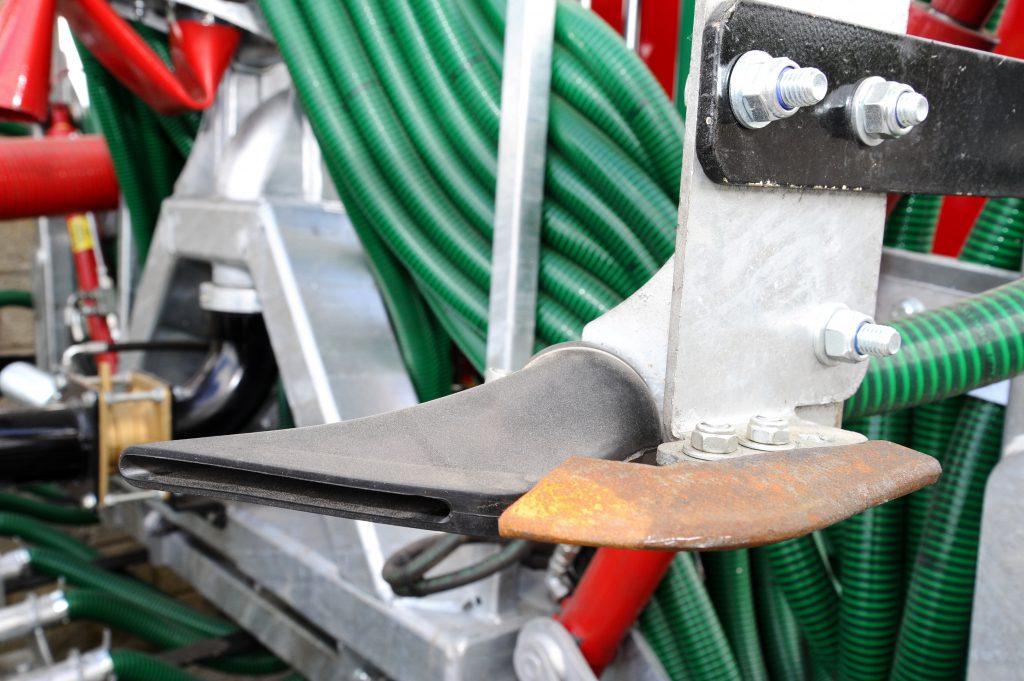 “The trailing shoe is best for getting the slurry onto the ground – under the crop canopy,” noted Darren. “However, it is heavier and does require more power.”

Dribble-bars appear to be the choice for all umbilical systems but, overall, it is now a far more confusing world of ‘mix-n-match’ options for getting slurry spread.

“Some farmers know exactly what they want; others have little idea of what is involved,” he noted. His ethos is to give advice freely and without prejudice, in the belief that customers will return to a dealer they can trust.

Selling is about people; farmers buy off the person rather than just picking a particular brand. They will follow a salesman if he moves to a different company, as long as the product is still a good one.

Given that the task of getting rid of waste has now been elevated to the distribution of a valuable resource, the steep trend away from simple splash-plates is only to be expected.

“With the grants now available, farmers are buying new tankers rather than retro-fitting their old ones.” 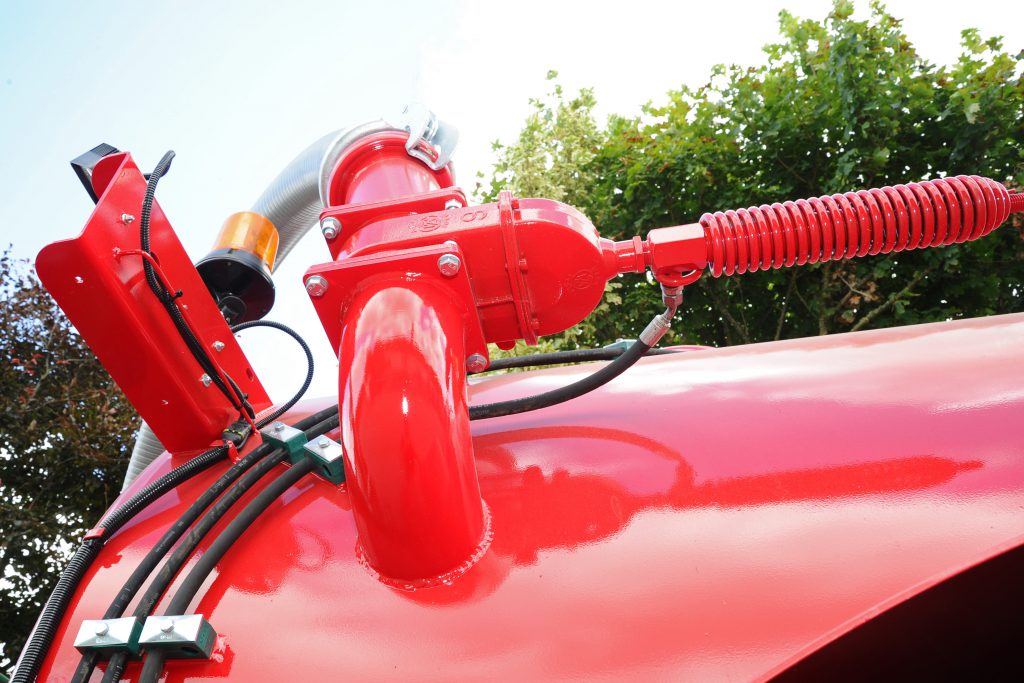 SlurryKat will happily supply a retro-fit system (trailing shoe or dribble-bar) on its own, but Darren warns strongly against fitting them unless the tanker already has brackets fitted for this purpose.

The other great trend is towards umbilical systems; these are more suited where the fields are in a block around the farm. “The extremes of weather we are seeing is creating a lot of interest,” explained Darren.

The advantages are clear, he feels: less compaction; preservation of gateways; better utilisation of slurry; and overall greater efficiency are the positive points he lists off.

Despite the core of the fledgling firm’s business being the sale of SlurryKat’s tankers and trailers, Darren has further product lines. These include the ‘Tractor Bumper‘ range and the full gamut of ProDig loader attachments and bale-handlers.

The ‘Tractor Bumper’ does exactly what its name implies; it provides protection for both the tractor and other vehicles, should they unfortunately come into contact. 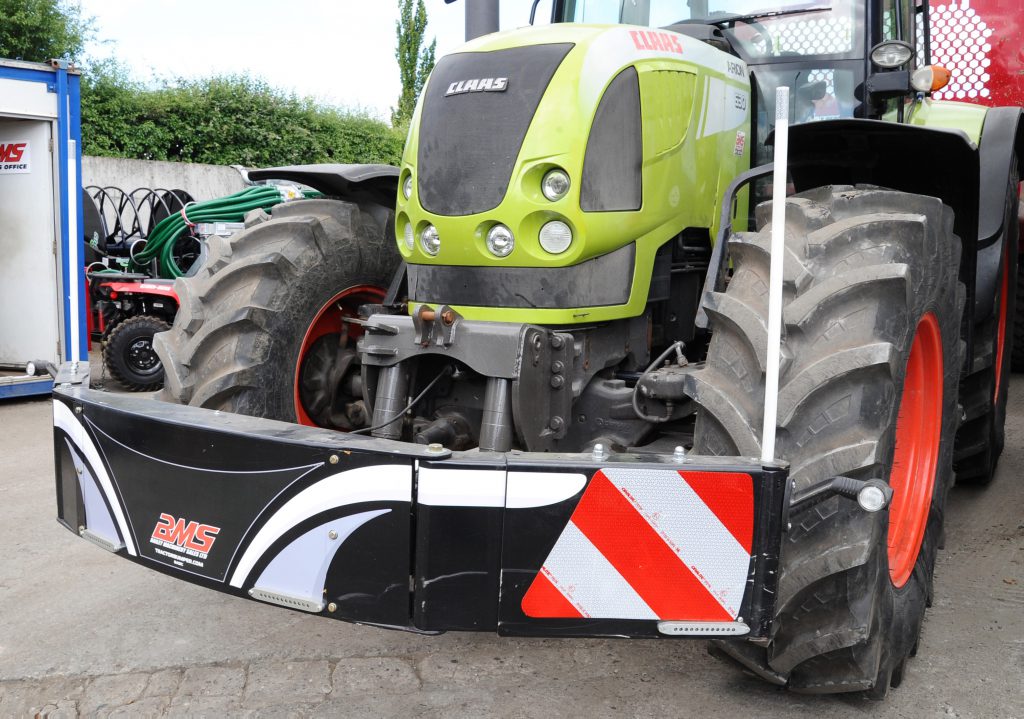 They come in three versions. There’s a basic bumper; or one equipped with a storage compartment; or one that includes a front-end weight. All have a built-in crumple zone to absorb shock.

Made in the Netherlands, BMS is the importer and main agent for these items. They are intended as practical attachments for any tractor with a front linkage, though Darren does concede that there is often something of a “bling factor” involved in the purchase too. 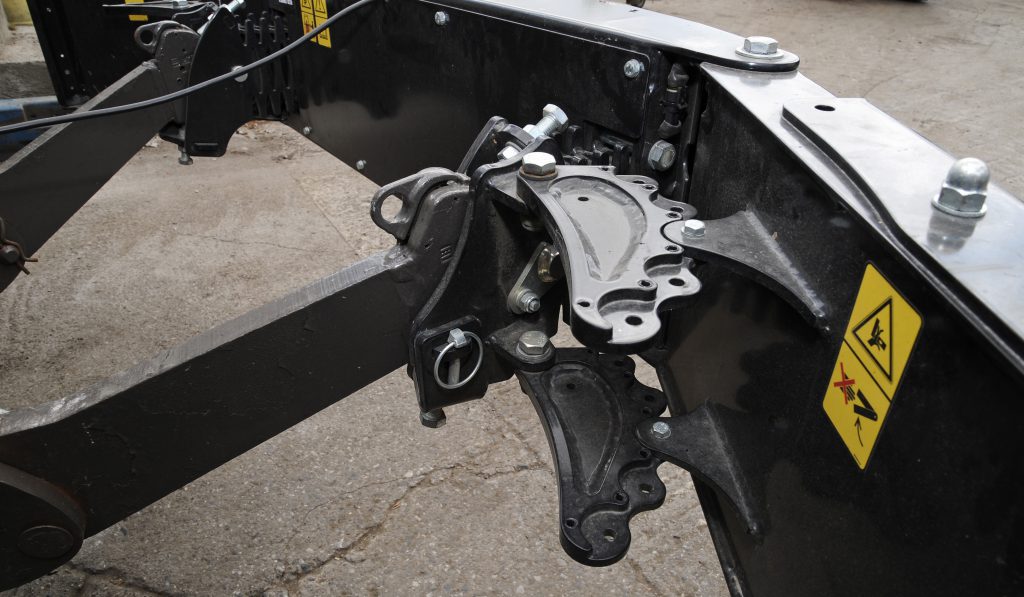 Meanwhile, ProDig of Carlow is now a well-established manufacturer of attachments – for tractors and loaders. “It’s a seasonal trade; we are looking towards the autumn before it picks up again,” remarked Darren. 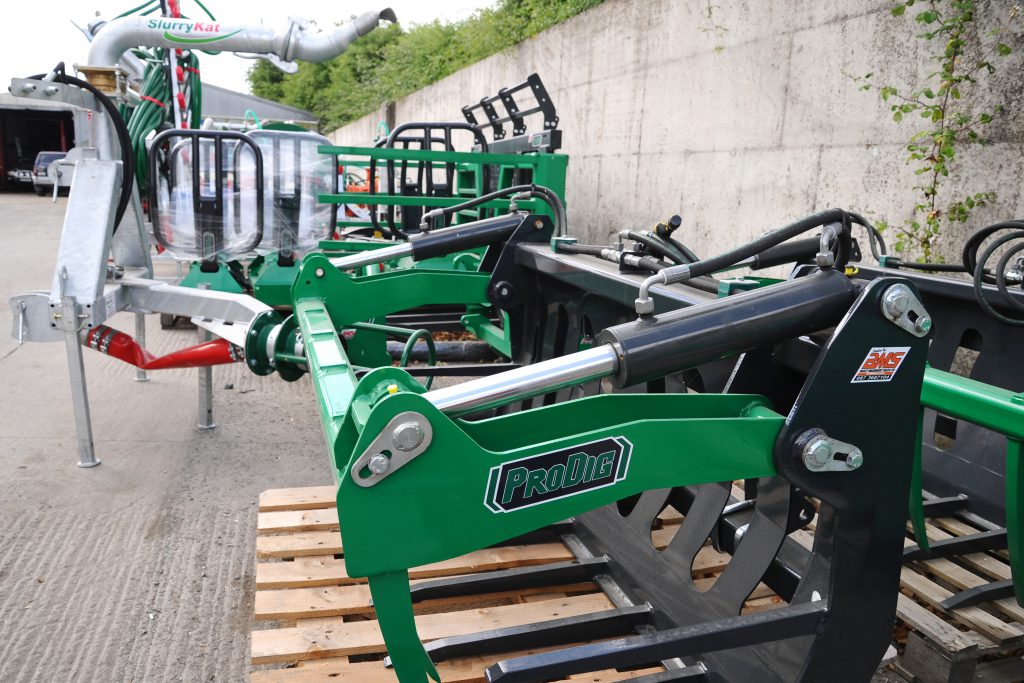 “ProDig is another quality product that I’m happy to associate the company with.

I’d rather sell a good product at a low profit, rather than an indifferent one at a higher margin. They are less likely to come back or need fixing in the field.

Now well into his second year of trading, Darren has no regrets about setting out on his own. Having been offered the opportunity to team up with SlurryKat, he felt it was right to “just grab the bull by the horns and get on with it”. 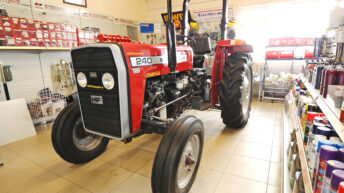 Trade focus: The tractor ‘trapped’ in Kerry that trades parts to the world 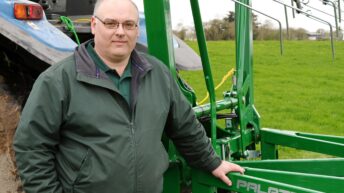