Irish sheepmeat is unlikely to gain access to the Japanese market without electronic tagging, Minister for Agriculture, Food and the Marine, Michael Creed has stated.

Speaking at a media briefing in South Korea, during this week’s trade mission to Asia, the minister admitted that Ireland’s current traceability system has become a stumbling block in market access negotiations.

On sheepmeat, to be honest, I don’t think we’ll be getting our sheepmeat access under our current traceability regime. It’s something we will revisit shortly when we go home.

“It’s not the first time there have been issues with it (lack of electronic tagging) in terms of market access engagements with other countries. I don’t want to say too much now; but it’s something we need to address,” he said.

The minister said progress on beef access to Asian markets is the key priority of this week’s trade mission to Japan and South Korea.

“From our perspective the big issue is to progress the beef access. There is potential in markets that are open already. There is a very significant seafood market; dairy; pork; but the one we would like to make progress on politically is beef access.

“There is a six-stage process; we are at stage four. We have had some very substantial meetings and we are eager to progress this.

“We had a delegation from Korea earlier this year in Ireland. It’s slow, slower than we would like; we don’t control the lever on this. They are about 70% self-sufficient in beef. Discussions have been positive,” he said.

The minister said talks with the Japanese government over removing the 30-month restriction on beef exports is also advancing.

The minister, who attended the briefing with Tara McCarthy, CEO of Bord Bia, noted the support of Eiji Negishi, owner of hugely popular family-owned restaurant chain ‘Negishi‘ – operating at 38 locations across Tokyo.

More than one million pieces of beef tongue are served at the restaurants every year, with a total customer base of 5.4 million. 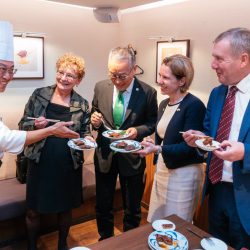 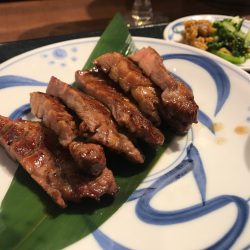 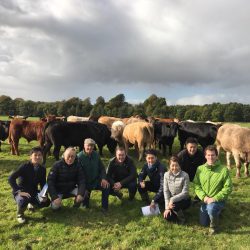 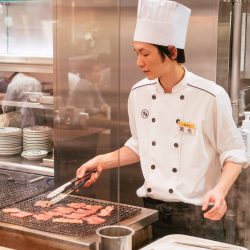 Beef tongue on the grill at Negishi restaurant, Tokyo

Last July, Negishi attended Bord Bia’s beef and lamb seminar in Tokyo, which resulted in Bord Bia hosting the CEO in Ireland for 6 days last month. It was agreed that both parties will work together to research and develop a marketing positioning for Irish beef across the restaurant chains.

“His business is almost more a philosophy-driven business rather than being all about the money. He wants to put substance behind the passion and for that to be visible on his menus.

He wants to tell the Irish story to the Japanese and bring to life grass-fed and Origin Green. As a partner he is going to be fantastic.

On the fishery side, Minister Creed said there is a lot of potential in Japan and Korea – in particular on shell fish.

“Seafood is our biggest export, it’s about 40% of the value of our exports every year. The global demand for seafood in any market probably outstrips the capacity from the high seas and agricultural sources. There is a lot of potential here.

“There have been increased resources from the department for seafood and it’s being specifically directed at this market.

“The key teller with seafood is being able to source it, and obviously with the Brexit negotiations that is the challenge,” he said.

Pics: 'Japan is slowly realising our beef is not all about tongues and offal'