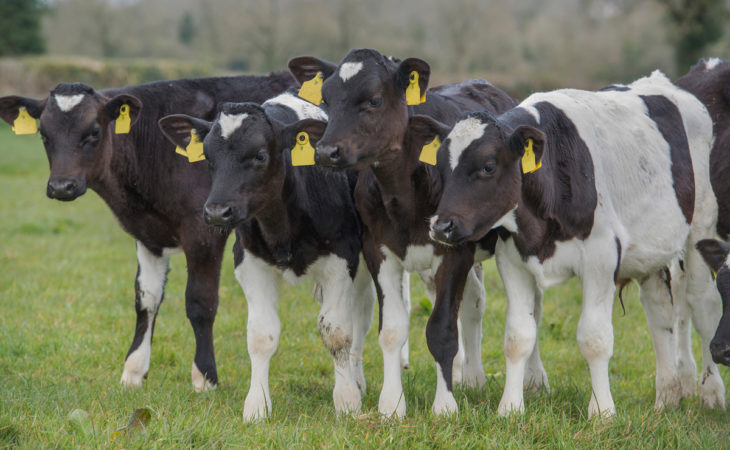 Young heifers aged four-to-nine months are easily forgotten. They’re out of the danger zone, but not on the radar for breeding.

Yet it’s critical that growth rates are maintained. They should be 45-50% of their mature body weight at puberty and 55-60% at breeding at 13-15 months of age.

Turnout for these young calves can be tricky. Their performance can vary depending on grass quality, management and parasite control. And, they can suffer a setback as they adjust to the new environment.

It’s worth trying to keep them in a sheltered area close to the farm for the first two weeks outdoors and maintaining concentrate intake to ease the switch in diet.

And, as the grazing season progresses, concentrate supply will help to balance the grass and maintain vitamin and mineral supplementation.

Heifers won’t eat second best. They are fussy eaters and intakes can vary considerably depending on weather conditions and grass quality. Also, they will avoid grazing certain areas of the paddock for no apparent reason. So, a rotational grazing system is often best to avoid waste.

Heifers are more vulnerable to diseases and parasites such as internal parasites, flies and clostridial diseases, in their first grazing season when they have little immunity to these challenges.

It’s worth getting a heifer health plan and asking your vet to draw up a plan to control internal parasites.

Health status will be protected by turning calves on to safe pasture that has not already been grazed by cattle, even in the previous summer, to avoid exposing them to a build-up of new infective larvae during the mid-summer.

It is a good idea to monitor faecal egg counts and treat calves for worm infections or move them to low/moderate risk pastures from July onwards.

Bought-in stock should be quarantined for 48 hours and treated to kill any worms before mixing with the rest of the herd.

Post weaning is an important time for mammary development. From three months old until puberty, the udder grows faster than rest of body and mammary growth is inhibited by excessive growth.

Excessive growth can result in lower milk yields in subsequent lactations. A growth rate of 0.75-0.80kg/day should be maintained.

Electronic scales are inexpensive and accurate – and a good investment. These young calves can be weighed at turnout or worming as part of routine jobs. It needn’t be a burden, but it will formulise this growth phase and reduces the risks associated with guesswork. Click here for more information